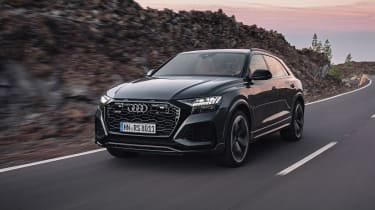 The RSQ8 is powered by the Volkswagen Group’s 4-litre twin-turbocharged V8 unit found in everything from the RS6, Porsche Cayenne Turbo and Bentley Continental GT to the Audi S8 and Lamborghini Urus. This widespread application might soften its desirability, but not so its efficacy – this is one seriously effective and rounded engine.

Like the similarly powerful V8s currently built by AMG and BMW’s M division, the RSQ8’s two turbos are situated in a hot-V layout, sitting between the cylinder banks and fed off a dramatically shorter cast manifold that runs in the reverse direction to a traditional V8 engine layout. As BMW and AMG realised, this method not only improves response, but also aids packaging between different models, although as its name might suggest this layout runs very hot, so to help cope with this Audi has fitted two air-to-air charge coolers in each of the outer front air intakes.

The engine is extremely linear and refined, no doubt helped by the RSQ8’s well insulated chassis, and when pootling around at low speeds or on motorways, feels no more dramatic to lesser models. A few prods of the touchscreen though and the whole powertrain wakes up as the V8 makes itself heard through both natural and synthetic means. On cars fitted with the optional sports exhaust, this also unlocks some extra decibels from the rear, although that innate refinement is so impressive as to pretty much block it out.

Get the powertrain into the right mode and the engine’s response is deeply impressive, revving cleanly and urgently at pretty much any rev. Speed builds with serious intent, although as we mentioned before, the isolation of the cabin and the sheer mass around you makes it feel less thrilling than you would expect. When at its most aggressive the powertrain starts to lose the smooth edge and gains a slight serration to the noise and power delivery, with a sharp off-throttle response mimicked by a transmission that just keeps getting better and better. 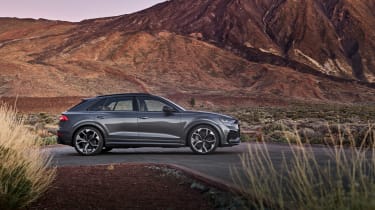 It’s ostensibly no different to the transmissions that have been seen in RS Audis before, but the calibration is far more aggressive than in other applications, punching through gears with a snap almost comparable to that of a good dual-clutch. Downshifts perhaps lack an ultimate crispness, but it’s more responsive than both units found in equivalent BMW, Mercedes and Land Rover products, while matching them in low-speed scenarios. Audi, like many of its VW Group relatives, gives the driver the ability to decouple the transmission from the powertrain mode, leaving it to you whether you want the standard transmission mapping, a sports mode or full manual control. There’s also a fourth mode on the transmission that delivers the most aggressive and hilariously noisy up and downshifts.

If there is a downside to the powertrain it’s that if you drive the RSQ8 with a clumsy nature it won’t cover it up. Sharp or unnatural inputs of the throttle leave the software confused, often taking time to electronically ‘join the dots’ as the transmission, all-wheel-drive system, turbochargers and suspension all race to link up. The result is that sudden overtakes or spur-of-the-moment pins of the throttle often take quite a while to deliver full potency, and when they do it can come as quite a shock as 592bhp all comes at once.