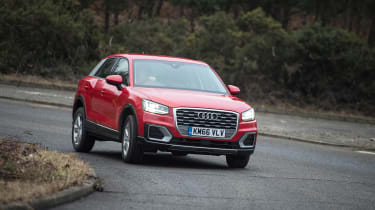 The Audi Q2 is an SUV crossover designed to attract the attention of fashion-conscious younger buyers whose heads might otherwise be turned by rivals such as the Mini Countryman or Volkswagen T-Roc.

The Q2 is no relation to the old A2, which was an ingeniously engineered supermini with cab-forward MPV styling and low-drag, lightweight aluminium construction – and arguably ahead of its time. Instead, Audi’s smallest crossover is one of multiple models spun-off the VW Group MQB platform, and it has a roster of related siblings that includes the Seat Ateca, Skoda Karoq, and the VW Tiguan.

> Click here to read our review of the new Mini Countryman

The model may have a raft of relatively conservative SUV relatives, but with the Audi Q2 price set to attract a younger, ‘funner’ crowd, it comes with fashion-conscious styling that – for Audi at least – is a step beyond the usual generic style. 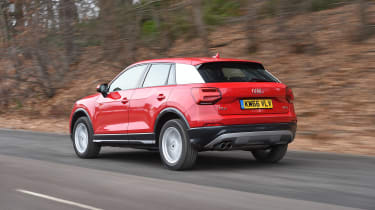 In fact, to Audi traditionalists the Q2 styling will be verging on the outlandish, although it’s by no means as overtly funky as some of its rivals.

While it’s smaller than other SUVs in Audi’s line-up – the Audi Q2 dimensions mean it sits between the brand’s A1 and A3 hatchbacks for length – it’s not the most affordable of cars in the small crossover sector. You’ll need £21k for the entry model before you’ve started looking at the various Q2 engine options and the trim levels on offer.

The Audi Q2 is decent to drive though, with a reasonably agile chassis and direct steering. It’s also pleasant to sit in thanks to Audi’s impeccable build quality, so while it’s a good all round effort, it’s not the sort of car that sets our pulses racing. 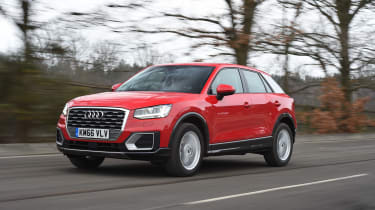 > Performance and 0-62mph time - Performance is never a top priority in this class, but strong VAG group engines mean that even the lowly 1-litre three-cylinder hits 62mph in 10.1sec.

> Engine and gearbox - Kicking off with the aforementioned 1-litre, a 1.4-litre four-cylinder petrol and two diesels (1.6 and 2.0) are also available, with S-tronic dual-clutch gearboxes and quattro all-wheel drive also on the options list.

> Ride and Handling - Based on VW’s MQB platform, the Q2 is more a tall hatchback than traditional SUV so handling is impressive for the class. Don’t go expecting any Golf R-like thrills though.

> MPG and running costs - With MPG as high as 68.9 for the 1.6-litre diesel, the Q2 is impressively frugal against rivals, ensuring that running costs don't exceed that of a normal premium hatchback.

> Interior and tech - The Q2 doesn’t only share its platform with the A3, but also its interior components and minimalist style. The vast options list can be an expensive rabbit hole though.

> Design - Introduces a new design language to Audi’s crossover range. When specified right, the Q2 can look fresh and distinctive. 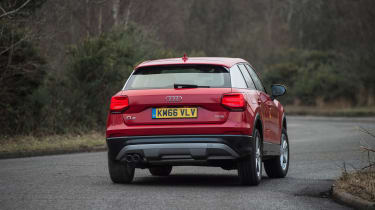 Every manufacturer seems to have a compact SUV on offer these days, and Audi's no exception, tempting younger buyers into the premium brand with its affordable Q2.

£20,000 will get you a fairly well-equipped car, coming with a sharp MMI infotainment system (albeit without navigation), air-conditioning, 16-inch alloy wheels and a leather trimmed steering wheel. As you'll find on many new models from Volkswagen Group, the Q2 comes with an array of safety equipment as standard, too, including active emergency braking, pedestrian detection and six airbags.

> Click here for our review of the Volkswagen Tiguan

Fork out an additional £1500 and you can get your hands on the Sport trim, adding larger wheels, satnav, automatic wipers and lights as well as cruise control and an improved stereo system to the mix. Spend £27,000 and you can bag the Q2 S-Line, equipping your car with body coloured bumpers, LED head and tail lights as well as an improved interior with sports seats and steering wheel.

In this competitive class, the Q2 not only has to compete in its own sub-segment of premium alternatives, but with lots of similarly priced yet more practical mainstream rivals. Mini’s Countryman is perhaps the most direct rival. The larger proportions of this model may be enough to dismiss it as too large a vehicle, but buyers will no doubt be tempted by the pair all the same. Starting a whisker over £23,000, the Countryman is also priced on par with the Q2.

Perhaps with less intention to infiltrate the younger buyers market, Mercedes-Benz offers the similarly sized GLA, although it is only available with larger engines, and an extra £3000-4000 depending on spec. Outside the German dominated premium realm, the middling brands of the Volkswagen Group are well worth a look in the SUV sector. The angular SEAT Ateca is priced around £3000 less than the Q2, but is closely related under the skin. The bigger Volkswagen Tiguan starts at just over £23,000 with a larger 1.4-litre four-cylinder petrol engine. 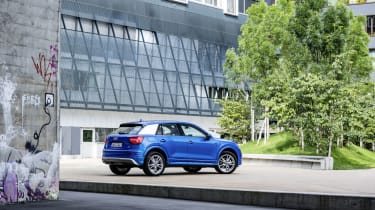