Audi’s once again ditched the front driveshafts to create a rear-wheel-drive R8, but this time it won’t be a limited-run model 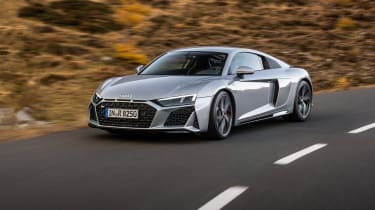 Audi has revealed a new entry-level version of its R8 supercar, picking up from where the previously limited-edition RWS model left off in offering a rear-wheel-drive version of the V10-powered mid-engined supercar. The difference now is that unlike the RWS, the new R8 V10 RWD will be a series-production model to be sold alongside the current R8 V10 quattro and V10 Performance models, and available in both coupe and Spyder forms.

Key performance figures are familiar from the previous RWS model, with a 533bhp peak power figure from the same 5.2-litre naturally aspirated V10 petrol engine. That peak might be 39 and 79bhp less than those of the current quattro and Performance models, but it’s reached at 6500rpm, around 1500rpm lower in the rev band than is the case with the all-wheel-drive siblings. Not only this, torque is only 30lb ft down at most too, so performance should still be impressive enough.

That power is sent via the same seven-speed dual-clutch transmission as featured in other R8s too, and reaches the rear wheels via a mechanical locking differential. The reduction of drivetrain components has also usefully lowered the weight figure, with the R8 RWD hitting the scales at 1595kg, 75kg less than the R8 Performance flagship, negating some of the RWD’s power deficit. 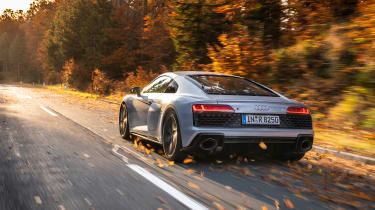 As you might expect, the R8 RWD’s acceleration figures have been compromised by both the reduction in off-the-line traction and brake horsepower, it taking 3.7sec to reach 62mph which is 0.4sec and 0.6sec behind the quattro and Performance models respectively. Top speed is rated at 198mph.

Visually, little aside from the body-coloured lower and black upper intake caps point the R8 RWD out, but keep away from the options list and there is something very appealing about the standard 19-inch wheels and their bulkier tyre sidewalls.

Detailed UK specifications, availability and prices have yet to be released, but the RWD will be priced below the £128k R8 quattro. 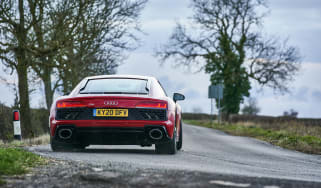