Audi’s R8 is poised to get a shake-up. Is this facelift the start of its transformation? 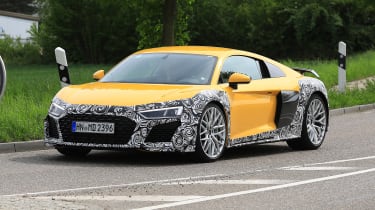 A refreshed version of Audi’s R8 supercar has been spied with a new set of bumper treatments front and rear, signalling that a mid-life facelift is imminent for the flagship Audi Sport model. Trouble is, sales of the V10-powered supercar have been distinctly flat in its second generation, throwing into question the future of the R8 and the R8 brand.

Starting with this specific prototype, though, the Vegas Yellow car here is sporting a new front bumper, more closely aligning the R8 with other Audi models like the new A7. As a result, the grille has grown in width, and the R8’s trademark slats under the headlights have been replaced with a simplified mesh treatment.

> Click here for our review of the new Audi R8 RWS

The side sills and rear bumper have also been redesigned, the latter replacing the two openings, which used to sit below the thin tail lights with a full-width mesh panel. Gone, too, are the trapezoidal exhaust outlets, replaced with oval pipes jutting out from a new rear diffuser. 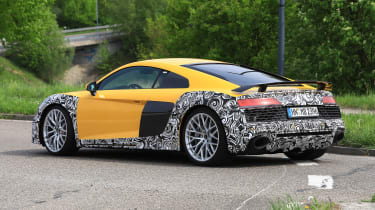 The big question we are asking here is what those new exhausts are attached to, as although we love the 5.2-litre naturally aspirated V10 fitted to the current R8, increasing performance from turbocharged rivals, as well as tightening emissions regulations, put the V10 in a vulnerable position.

The current V10 is likely to remain as it is for this facelift, though, but new options such as Audi’s twin-turbocharged V6 and V8 engines have been rumoured to be fitted, although this has not been verified by Audi. Reports of the five-cylinder turbocharged engine from the TT RS and Audi RS3 have also been thrown into the mix, but this is less likely.

As for the future of the R8, Audi has confirmed its intention to keep hold of the R8 brand, but what form it will take in future will be of most interest. Electrification, and a wider adoption of the upcoming hybridised, turbocharged V8 engines about to proliferate around Audi Sport’s larger RS models, might also find their way into a future R8, replacing the V10 flagship engine when emissions regulations finally kill it.

The R8’s role as a halo product, and homologation model for Audi Sport’s profitable customer R8 LMX race car, mean that the future of the R8 is pretty certain. What form it will take is the bigger question.