ABT extracts 424bhp from the Audi RS3 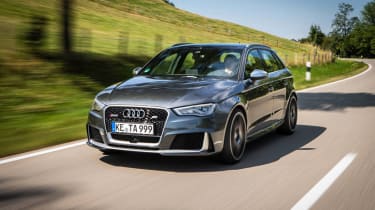 German tuning house ABT Sportline has revealed the specifications of its take on the Audi RS3. With the fitment of a new piggyback ECU and customised mapping, ABT has increased the output of the RS3’s turbocharged 2.5-litre five-cylinder engine to 424bhp, moving the four-wheel drive hatch into close contention of the 425bhp BMW M4 and even matching the power output of the previous generation V8 Audi R8.

This represents a substantial 62bhp boost over standard, and is accompanied by an extra 41lb ft of torque - the peak figure now 391lb ft. The results of this extra potency are a claimed 0-62mph sprint time of 4.1sec, and, thanks to the removal of the electronic limiter, a 177mph top speed – matching the Porsche Cayman GTS’ terminal velocity. 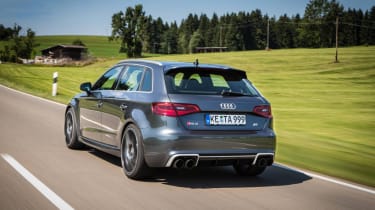 ABT’s RS3 sits on a choice of two sets of wheels – EC-C or ER-F – of 19-inch diameter painted in Gun Metal, Silver Bullet or Black Magic colours. ABT has also added a new stainless steel four-pipe exhaust system with black-chrome tailpipes, and can fit sill plates with illuminated ABT lettering and ABT floor mats as an option.

Interestingly, the tuner has also confirmed that it’s working on what it calls the ‘Power S Package’, which should see both the power and torque figures of the RS3’s 2.5-litre engine grow even more. Considering this is a five-door, five-seat hatchback, this supercar-threatening performance is incredibly impressive. 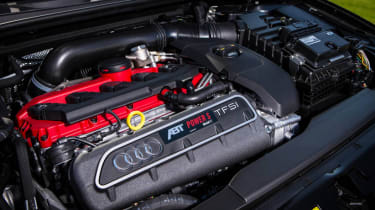 The standard Audi RS3 isn't exactly lacking in straight-line performance, but our experiences with it on track confirm that it’s not necessarily the most engaging steer in its class. The 297bhp VW Golf R, for example, stole road test editor Dan Prosser’s attention on our recent Deadly Rivals video, with its more dynamic chassis and throttle-adjustable rear end. That being said, ABT’s RS3 now has the power to trouble sports cars and supercars, giving it a different focus entirely.

ABT is yet to confirm pricing, but for reference, the standard Audi RS3 starts at £39,950.