Less than a month after Juha Kankkunen and a Bentley Continental snatched the 200mph+ ice speed record, an Audi RS6 breaks it 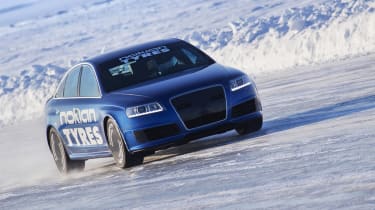 Finnish tyre company Nokian has apparently set a new ice speed record of 206.05mph with an Audi RS6. That nudges ahead of Bentley’s recent ice speed record of 205.48mph, set by Juha Kankkunen back in February when the four-times WRC champion piloted a Bentley Continental Supersports Convertible for the world record. That inspired Bentley’s Continental ISR Edition, detailed here. Complete with spiked tyres, a roll cage and a few choice aerodynamic modifications (one being an added parachute), Nokian’s Audi RS6 broke the month-old record by just 0.57mph. It was helped there by Finnish rally star Janne Laitinen, put behind the wheel to strip Kankkunen and Bentley of their prize. The Nokian Tyre team was the previous ice record holder (incidentally, with a Bentley), hitting a maximum speed of 199.86mph back in 2007. There are whispers that the blue saloon used in the record attempt wasn’t an entirely standard car, and this seems to be supported by the curious lack of detail surrounding engine modifications. Nevertheless, the record attempt went ahead at a special 10mile track, laid out on the frozen Gulf of Bothnia between Sweden and Finland. That the ice speed record has been broken twice in very quick succession has been a bit of a surprise; the fact it’s been snatched by a Finnish rally driver each time is, however, less of a shock…

Audi RS6 versus Aurdi R8 Coupe: which is fastest?