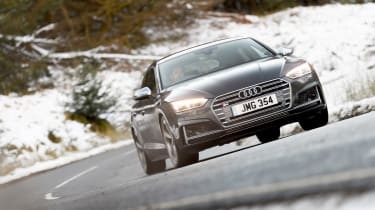 Somewhere in the depths of Ingolstadt there is an analyst who can tell you the number of permutations possible within the Audi model range. They spend their working day calculating just how many variants the company could build, should enough people order each model in every trim and specification available.

This new S5 Sportback will only add to that algorithm. In simple terms, it’s the four-door coupe-saloon based on the all-new A4, a car that’s proving to be far from a flat-footed Audi and one that, in S4 guise, is a genuine rival to AMG’s C43 and BMW’s 440i.

Weight is down 85kg to 1660kg, with its new 3-litre V6 turbo engine accounting for 14kg of that saving. Power is up 21bhp to 349bhp and torque swells by 44lb ft to 369lb ft, which when hooked up to the eight-speed Tiptronic gearbox and the latest quattro system helps the car reach 62mph four tenths quicker than its predecessor, at 4.7sec.

The V6 has plenty of guts and the gearbox is at its best when you change gear. Left to its own devices, it will always hunt out the highest ratio, resulting in a frustrating wait as it drops back down for slower, tighter turns. 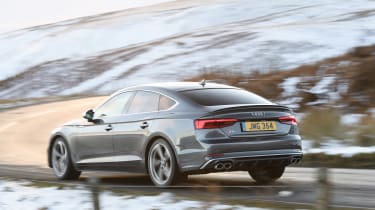 Running a standard 19-inch wheel and optional active dampers, our test car’s ride is taut without being a constant nuisance. The primary ride has it floating over most surfaces without isolating you, while the secondary ride is quick to settle and filters out any unwanted interference. Considering the spring and damper rates are stiffer than before, there’s a fine balance of comfort and agility. A further option on our test car is the rear Sport diff – essential because it adds a further layer of precision to the dynamic process, tightening the front axle’s line and lending the rear axle an unexpected precision.

The lower weight and its improved distribution bring an eagerness to the S5 that encourages you to push far more than you felt inclined to do in its predecessor. The optional Dynamic Steering of our test car is a further development of the system we love to hate, but it’s improved, delivering a more natural weighting, if not any genuine feel. It’s precise and intuitive and the confidence it breeds allows you to get into the throttle earlier. After a few runs along familiar roads, you’ll ask why it’s taken Audi so long to sharpen the claws of its S-cars.

Indeed, cross-country is where the S5 surprises most.  However, on roads that would have dealt its predecessor an uninspiring verdict from us, this car is alive, involving and rewarding. 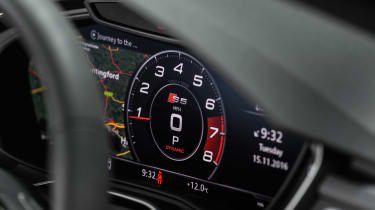 Rivals primarily come from within the Audi range, from the S4 in its saloon and estate forms to the other S5s, but look elsewhere and the Mercedes-AMG C43 is a close rival (also packing a turbocharged V6, albeit using a pair of turbos rather than the Audi's one) and starts at £45,785 in saloon form. BMW offers a closer rival in pure bodystyle terms with the 440i Gran Coupe. This one uses a turbocharged 3-litre inline six and lags the Audi and Mercedes' performance figures, but at £44,420 it's cheaper than both.

With an interior to make rivals weep and now as capable as you’d expect a 349bhp sports saloon-coupe to be, unless you need the practicality of an S4 Avant, the S5 Sportback is the pick of the family.