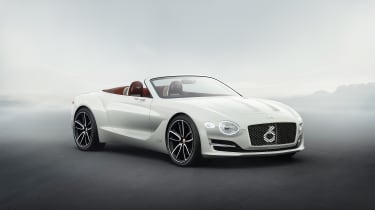 Bentley has taken the covers of its latest concept at this year’s Geneva motor show. The new convertible GT, called the EXP12 Speed 6e, is the brand’s first ever fully electric vehicle and paves the way for Bentley’s future strategy of adding electric and hybrid drivetrains to its range of vehicles. The first production model to be made into a plug-in hybrid will be the Bentayga in 2018.

The idea of an electric Bentley isn’t so strange; the power delivery of an electric motor suits the torquey effortless nature that the luxury marque have become known for. However, the short range and long charging time of electric cars don’t suit Bentley’s continent shrinking GT capabilities.

> Read our review of the Bentley Continental Supersports

Bentley’s solution is that Speed 6e would be able to use high-speed inductive charging to help owners drive the length of France, for example. When not driving on the inductive charging network, the Speed 6e can be charged from an ordinary power supply via a socket hidden behind the rear number plate. 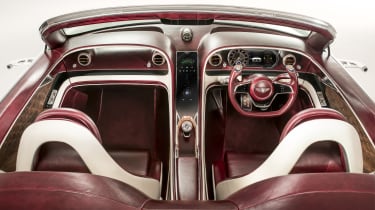 Bentley hasn’t revealed any information on the Speed 6e’s drivetrain and hasn’t even hinted at the car’s potential performance. We’d expect the car to be four-wheel drive like the Continental GTC that it could potentially replace. That would mean two electric motors, each of them driving just one axle as in Tesla’s Model S P100D.

> Read our review of the Tesla Model S

If the EXP12 Speed 6e looks familiar that’s because rather than its body being all-new it’s really a drop-top version of the Bentley EXP10 Speed 6 that was shown at the 2015 Geneva motor show.

The new Speed 6e has the same nose as the coupe concept and even features a six in the grille. Rather than being painted on the mesh of the radiator vent like the old concept or a pre-war racing Bentley, the 6e’s digit lights up when the car is running. 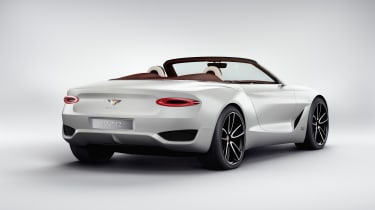 It’s inside where the Speed 6e really impresses, though. The car’s centre console is made from curved glass that covers a high-definition screen LED where the infotainment is accessed and controlled.

The cutaway steering wheel in the Speed 6e has two buttons contained within the rim at the top of the wheel. One activates a boost in performance while the other limits the car’s speed. Glass panels on the spokes of the wheel allow extra control of infotainment system. 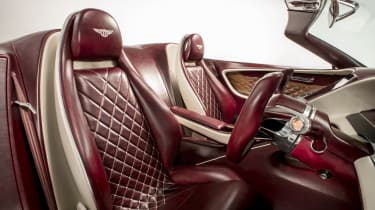 The interior is trimmed in luscious deep red leather, but rather than the affected, synthetic-looking hide found in modern cars the covering on the Speed 6e’s seats and dash looks more natural. The visible grain and discolouration of the leather almost conjures up the smell of a tannery or cobblers workshop. The luxury is increased by polished aluminium switches as well as a copper surround to the gear selector and inlays in the door panels.

Thanks to the exquisite looking leather and shiny metal the inside of the Speed 6e looks like a much more appealing place to be than the clinical environment of most modern cars; it’s the automotive equivalent of a wood panelled study in a grand stately home. 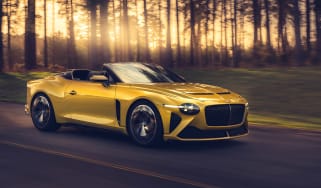