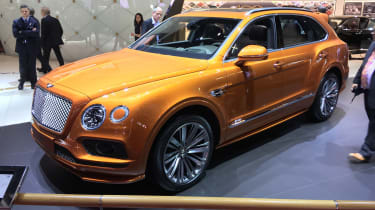 Stand aside Lamborghini: Fellow Volkswagen Group sibling Bentley now offers the fastest production SUV on the planet in the shape of its new Bentley Bentayga Speed.

True, we can think of few more pointless exercises, but if the maximum velocity of two-ton vehicles is among your buying criteria, then you should know that the new Bentayga Speed’s 190mph top end is a single mile per hour more than that of a Lamborghini Urus. A rounding error to most, but assuming those in the market don’t just go out and buy one of each, undoubted bragging rights to the victor.

Lamborghini’s SUV is still quicker to 62mph at 3.6sec compared to the Bentley’s 3.9sec, but the two brands do at least tread their own path when it comes to delivering such performance. While the Urus packs a twin-turbocharged 4-litre V8, the latest Bentayga Speed uses a development of the existing Bentayga’s 6-litre, twin-turbocharged W12. 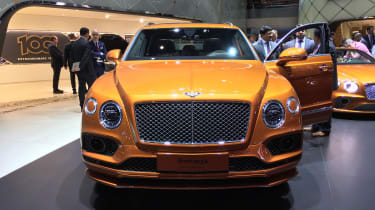 In this format the W12 now makes 626bhp, up from the round 600bhp of the regular car, while there’s also 664lb ft of torque on offer. Thankfully, the Speed packs more than just a power increase; a revised Sport mode helps with deploying it to improve both engine and transmission response, and this mode also adjusts the parameters of the Bentley Dynamic Ride suspension.

This system actively controls body roll using a 48v electrical system, while the suspension itself is firmer than that of the standard car. Ceramic brakes – the largest ever fitted to a Bentley, apparently – are optional, shedding five kilos per corner and capable of withstanding temperatures up to 1000 degrees C.

> Click here for our review of the Bentayga V8

The Bentayga Speed comes with the visual trappings its name suggests too, with previously contrasting trim elements now rendered in body colour, splitters for the front and rear bumpers, and a rear spoiler. Radiator and bumper grilles feature a dark tint, as do the front and rear lights, and a new 22-inch, ten-spoke alloy wheel design is available in a choice of either silver, dark tint, or black.

Inside too the Speed has been subtly reworked compared to its lesser counterparts. Alcantara and carbonfibre trim is available for the first time, some might say an inevitable appearance in the sportiest version, though customers can opt instead for leather if they choose.

Coloured elements pick out details in the seats, door trims and diamond-quilted stitching, and embroidered “Speed” text replaces the optional Bentley wings motif on the seat backs. The “Speed” legend can also be found as a metal plate on the passenger side dash, illuminated in the kick plates, and affixed to the lower edges of the front doors.

The Bentley Bentayga Speed made its debut at the 2019 Geneva motor show, just outside of glaring range from the Lamborghini stand. A retaliatory Urus is almost inevitable.