Lighter, faster, stiffer - the 572bhp GT3-R is the most extreme Bentley yet, but can it cut it as a truly great drivers' car? 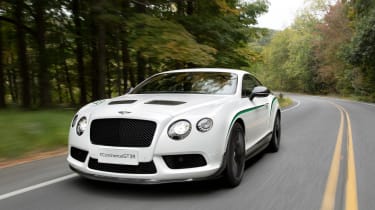 In the words of Paul Jones, head of the Continental product line, ‘the GT3-R is the most driver-focused car we’ve ever done. We wanted it to be a measurable step on in acceleration terms on the W12 and in dynamic terms compared with the V8 S. It started out as a classic skunkworks project with a very small team of people behind it.’

The 4-litre twin-turbo V8 is carried over, although new turbochargers lift peak output by around 10 per cent to 572bhp at 6000rpm. Those turbos are ‘blueprinted’ for an especially tight fit of the turbine within the housing, which promotes a better response, reducing the time taken to spool up.

The eight-speed ZF automatic gearbox is unchanged, although the final drive ratio has been shortened from 2.96:1 to 3.50:1 for much more urgent straight-line acceleration. In fact, the GT3-R will hit 62mph from rest in 3.8 seconds (4.5sec for the V8 S), which makes it the fastest accelerating Bentley ever, although its top speed has been slashed from 192mph to 170mph as a result of that shorter final drive.

The springs, dampers and anti-roll bars are stiffer all round for more responsive handling. Even the suspension bushes are stiffer – by up to 75 per cent in some cases – in an effort to eliminate the precision-ruining ‘squidge’ that comes with more compliant bushing.

The electronic stability control system has been retuned for later and softer intervention, while torque-vectoring – a first for Bentley – tweaks the inside rear brake during cornering to help the car turn into the bend. In common with the regular V8 S, the torque split across the four-wheel-drive system is 40:60 front to rear, with up to 85 per cent of torque being sent rearwards during extreme cornering.

There’s no doubting the lengths to which the drivetrain and chassis engineers have gone in their efforts to sharpen up the Continental, but given the base car’s sheer mass they might have been facing a losing battle. Through the use of carbon-ceramic brakes as standard (at 420mm the front discs are the largest fitted to any production road car), an Akrapovic titanium exhaust system, carbonfibre interior panels, lightweight forged alloy wheels and the deletion of the rear seats some 100kg has been stripped out, although at 2120kg the GT3-R is still very much in the heavyweight division. 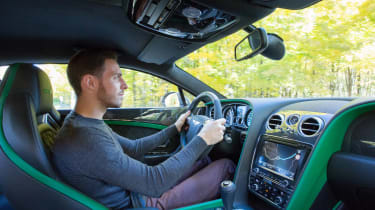 Never underestimate the transformative effects of an exhaust system on an engine’s character. Breathing out of those titanium Akrapovic pipes, the V8 is immediately more vocal and expressive, spitting out an authentic eight-cylinder warble under load, with violent pops and crackles on the overrun. Deep rumblings are also heard from within the hot exhaust when off-throttle, like the grumbling belly of a hungry beast.

The GT3-R isn’t just louder under full throttle, though; it’s also much more forceful in the way it accelerates. It matches the W12 models for straight-line thrust in the mid-range, but the V8 also feels more alert and keener at the top end. The eight-speed paddleshift auto gearbox shifts cleanly and quickly, while the new paddles themselves are less of an awkward stretch away from the rim of the steering wheel.

In the dampers' most pliant mode the ride is fluid and comfortable enough for long journeys, but smaller road surface imperfections do rattle through the structure a little more than they might in the standard model. It’s not a big issue, more a clear expression of the GT3-R’s sharper focus.

Basing this more sporting model on the V8 was an inspired move; not only does it strengthen the link to the V8-powered racing cars, it also trims a massive 40kg off the front axle compared with the 12-cylinder models. In combination with the torque-vectoring system and the stiffer chassis settings it makes the GT3-R the most agile and responsive Bentley we’ve tested to date. It turns in keenly, and off-throttle the rear end will even take an attitude (a result, perhaps, of the 57:43 front to rear weight distribution), although it won’t mobilise its rear axle under power in dry conditions.

Body control over undulations is pretty impressive for a car of such mass, but that weight does begin to show when you start to push harder. The GT3-R’s natural cornering state is gentle understeer, and in quick direction changes it struggles to overcome the inherent inertia and the momentum that builds when 2120kg is thrown around. 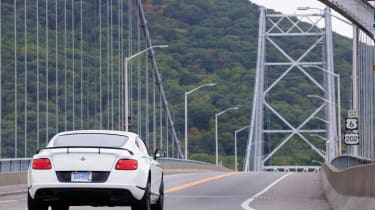 Bentley’s engineers didn’t engage in any objective benchmarking against rival cars during the GT3-R’s development – they only did so against the existing Continental range, says Paul Jones – although they did get the input of the new Bentley Motorsport division. The GT3-R takes its name from the marque’s Continental GT3 competition cars, which have been winning high-profile endurance races around the world during 2014, and the factory drivers have had their say on the road car. ‘We would go to a track where the race team was testing,’ says Jones, ‘and we’d get Guy Smith and Andy Meyrick to try the car. Those guys have built-in gyroscopes so they’re brilliant development drivers.’

The £237,500 GT3-R will be limited to just 300 units worldwide in an effort to ensure its exclusivity. Bentley’s engineers claim to have learnt a great deal during its development, not least pertaining to weight-saving and torque- vectoring, and according to the company the generally positive reception that the GT3-R has received thus far means we can expect similar, more athletic Continentals in the future. That can only be a good thing.

The GT3-R is very much Bentley’s own interpretation of what a lighter, sharper and faster version of an existing model should be, and so it must retain all the values of comfort and luxury that the brand is famous for. Although it does improve upon the existing range in dynamic terms, it won’t trouble a much lighter, conventional sports car for outright driving thrills.