Bentley has given the Continental a new engine - the 4-litre V8 from the Audi S8. Performance is similar to the existing W12, but economy is 40 percent better 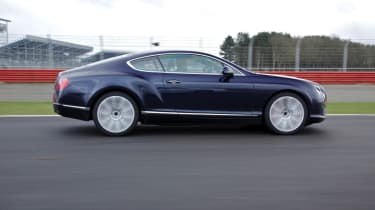 The future for the Bentley Continental, that's what. Or so we are told; in place of the 6.0-litre W12 is a 4-litre V8 developed from the one we’ve already experienced in the new Audi S8, featuring direct injection and the ability to become a V4 under light loadings. It produces 500bhp (not a huge drop from the W12's 567bhp), helped by twin turbochargers as used on the W12. But here's the thing: it's claimed to use 40 per cent less fuel than the W12, with barely any pace penalty. With this heavy and hugely rapid car's CO2 rated at 275g/km, water is being turned into wine here.

The new, all-aluminium, four-camshaft V8 engine has been ‘co-developed’ with Audi, and a slightly different version powers the new Audi S8 (which actually boasts a more powerful 512bhp state of tune.) It idles with all eight cylinders but shuts off the end cylinders of one bank and the middle cylinders of the other when being driven gently. This, plus an eight-speed automatic gearbox whose oil is heated during engine warm-up and a variety of other energy-savers ensures that the fuel-efficiency increase happens in real-world driving as well as in the official tests, according to Bentley’s engineering chief Brian Gush. The turbos are twin-scroll units to reduce response lag.

The complete Continental weighs 25kg less than the W12 version, a lower weight loss than you might expect because the intercooler system and the gearbox are heavier. There's no stop-start system because the gains are thought not to be worthwhile – especially as many drivers would turn it off anyway.

Bentley considers this a more sporting Continental, so the suspension settings are sharpened to suit.

Stunningly good. The new engine is tuned to give the powerful wallop from low engine speeds that you expect from a Bentley, but there's a new crispness here and some excellent sound effects. The W12 was never the most sonorous of engines, and the V8 shows what we've been missing. There's a deep bass woofle at low speeds, with a sharp, percussive crackle overlaying it as the revs rise, and the new gearbox makes the most of the engine's efforts with quick, firm but smooth shifts.

And that 25kg slim-down feels more like 250kg, with the nose behaving as though much lighter and more sensitive. The steering feels properly connected to the road and this no longer feels like a heavy, high-momentum car. Instead it feels keen and agile, hooking enthusiastically into turns and proving supple and light-footed over bumps. It's the best-driving Bentley in history, no question.

Pricing starts at around 10 per cent less than the W12 version, which means it should retail at around £122,000 when sales start next month. Notional rivals are the Aston Martin V12 Vantage and the Ferrari California (there'll also be a GTC version), but the Bentley offers more space than either with no real loss of driving excitement.

You can tell a V8 Continental by its more aggressive frontal styling, and by the fact that in 'basic' form it's fractionally less well equipped. The headlining is cloth rather than leather, for example, and the central armrest has one lid instead of two. But these worrisome deficiencies can be remedied via the extensive options list, after which the V8's price advantage over the W12 is looking minimal.

No matter – the V8 is a much better car, to the extent that the W12's continued existence seems entirely pointless.