The V8 powered Bentley Continental GT offers similar performance to the 6-litre W12, but with vastly better mpg and a lower price. A winner? 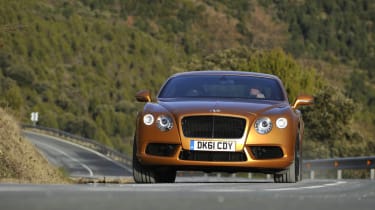 We’ve already driven the Bentley GTC convertible fitted with the new V8 engine, but now we’re having a proper go in the coupe version. You’ll have to squint to spot design differences between this car and the last, launched in 2003, but it’s under the skin that the real changes have taken place.

As with the convertible the Continental GT boasts an all-new 4-litre twin turbocharged V8 engine with 500bhp, which will be offered alongside the venerable 567bhp 6-litre W12. The V8 is a development of the engine Audi has fitted to the S6, S7 and S8, although the Bentley gets a unique state of tune. The V8 Conti shares the W12’s four-wheel drive system, but gets a new eight-speed autobox in place of the older six-speeder.

Weight is saved by aluminium bodywork and a plastic tailgate, and the V8 also features a clever cylinder deactivation system that turns it into a V4 at cruising speeds. That improves fuel economy over the W12 by some 40 percent to around 24mpg.

The V8 feels punchier and faster to respond than the – still hugely impressive - W12. Despite its smaller capacity the 4-litre engine still delivers 487lb ft of torque, while the eight-speed gearbox gives it a broader choice of ratios to choose between. Steering is light, although the Bentley is easy to place on the road. The mass saved by the new, lighter engine means that it feels far keener and more agile than the W12.

As before, the Continental is a supremely relaxed cruiser, with its long-range credentials improved by the new V8 ability to go much further on each gallon of super unleaded. Sharing the W12’s 90-litre fuel tank means that the V8 will be able to go over 400 miles at the 22-25 mpg that experience suggests it should  be able to return in everyday use. For contrast, the W12 struggles to manage 300 miles on a tank when being driven hard.

Bentley boss Wolfgang Durheimer likes to liken the Continental range to the Porsche 911 – presumably on the basis that you can buy both coupe and convertible versions in a variety of different states of tune. But the statement is also relevant to the way the model is following an evolutionary development process that’s seeing it enjoy a second wind, even after the best part of a decade on sale. At £123,850 – versus £135,760 for the W12 - the V8 isn’t exactly an austerity choice, but that makes it look very reasonable next to rivals like the Ferrari FF.