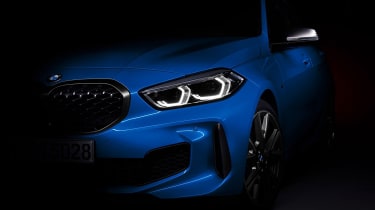 BMW did something different when it launched the first 1-series 15 years ago. Unlike all of its rivals, the 1-series hatch was rear-wheel drive – an interesting diversion from the norm that also helped justify its ‘premium’ price tag, if not its lack of interior space. Now, after two generations, BMW appears to be turning its back on yet one more aspect of its distinct personality with the launch of an all-new front-wheel-drive 1-series hatch later this year.

Plainly obvious from its proportions the new 1-series, as spotted here in camouflaged form, is being pitched as a more closely aligned rival to the hugely successful Audi A3 and Mercedes A-class. We’ve already been given a reasonable idea of what to expect design-wise thanks to the Chinese-market 1-series saloon, but this will be the first time BMW has launched a European-market 1-series hatch on this new platform.

Under the new bodywork, expect a variety of three- and four-cylinder turbocharged engines paired to automatic and manual transmissions. The interior will also be all-new, no doubt taking inspiration from the latest BMW models, incorporating the next-generation iDrive system, along with all the latest active safety tech. Latest spy pictures appear to show the M Performance variant testing on track, with larger wheels, brakes and a more aggressive front and rear design. 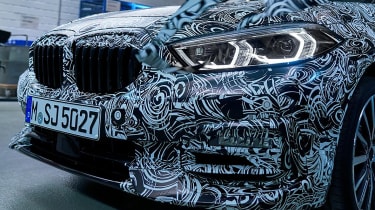 What does this mean for the next high-performance M Performance variants? Expect BMW to once again align itself with most major rivals, as it’ll drop both its six-cylinder engine and rear-wheel drive of the current M140i in favour of a highly tuned turbocharged four-cylinder engine and all-wheel drive. BMW’s upcoming BMW X2 M35i already features a 302bhp four-cylinder turbocharged engine, one that might be shared with an ‘M Performance’ 1-series to give BMW a direct rival to the next Audi S3, VW Golf R and new Mercedes-AMG A35.

There are practical reasons behind the new platform change – namely an improvement in interior accomodation, improved space efficiency, and not to mention a diversification of BMW’s new FWD platform to help cover the significant costs of developing it, but for enthusiasts it represents one more convergence between the main players offering variations on a single theme.

Though an official reveal date is yet to be confirmed, a recent teaser showing the removal of camoflauge from the model leads us to believe it's not far away. We’ll learn more about the all-new 1-series when it’s revealed in full, with high-performance variants, M Performance models and a Mercedes CLA-rivalling 2-series Gran Coupe to follow soon after.