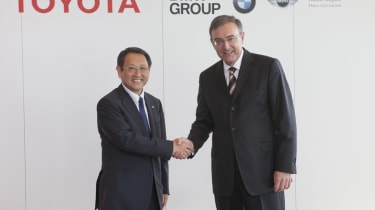 Toyota and BMW have been working together on some special projects on a trial basis since December 2011, and Akio Toyoda, President of Toyota, recently met with Norbert Reithofer, chairman of the Board of Management at BMW, to announce that the two companies would continuetheir partnership – focusing on fuel cell technology, in the hope of co-developing a green sportscar.

Both parties signed a joint statement confirming that they are both intent on continuing the partnership in the long term, citing BMW’s ability to produce great sporting cars and Toyota’s green credentials as the main reasons for the deal.

Although Toyota has the advanced hybrid technology, BMW produces some of the cleanest diesel engines in the world, and from 2014 will supply 1.6 and 2.0-litre diesel engines to Toyota.