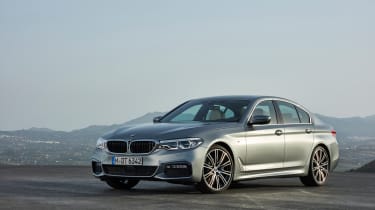 BMW has unveiled its all-new 5-series saloon. The car, which borrows heavily from the technology first debuted in the latest 7-series, will be capable of 0-62mph in 4.8 seconds in 540i form.

The new 5-series is lighter than its predecessor and features a new modular engine range that offers a wide selection of power outputs. There’s also going to be a plug-in hybrid option.

The car is now bigger than the one it replaces, at 36mm longer, 6mm wider and with a wheelbase increase of 7mm. Despite this, BMW claims to have improved the co-efficient of drag by 10 per cent.

Part of this low, 0.22 coefficient of drag is created using a new ‘Active Air Stream Kidney Grille’ that is able to open the lower air intakes and grille elements when cooling is required. 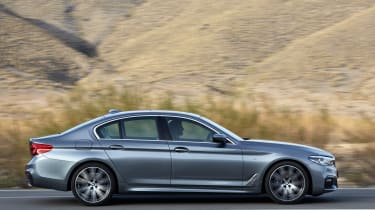 Other changes include the engine choices for the new 5-series. The petrol engines use BMW’s ‘TwinPower’ twin-scroll turbocharging tech, as well as Double-Vanos and Valvetronic systems. These powerplants feature in the 530i and 540i xDrive, while the diesel choice includes a 520d or 530d.

The 530i uses a turbocharged direct-injection four-cylinder engine and can manage 0-62mph in 6.2 seconds. The 540i, however, uses a 3-litre straight-six and features a 0-62mph time of 4.8 seconds. The diesel engines are all four-cylinder turbo units, with every car in the range being available with all-wheel drive as an option. The gearbox is an eight-speed automatic with paddles. 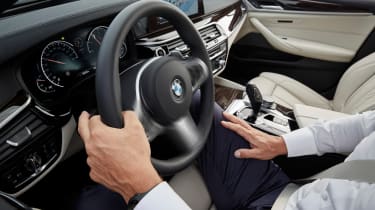 Set for launch in March is a 530e iPerformance plug-in hybrid model. This will use a combination of a four-cylinder petrol engine and an electric motor to generate 250bhp and a claimed 134.5mpg.

Interior tech has largely been lifted from the 7-series and includes features such as the gesture control seen in that car, as well as the intelligent key, which features an LCD display. The latest version of BMW’s iDrive is also present via a 10.25-inch HD screen.

A new ‘message centre’ button on the wheel will let you see things such as SMS, emails and notifications about the car at a glance. The HUD is now 70 per cent larger than before and has an improved resolution of 800x400 pixels.

The sound-system choice starts with the BMW Professional setup and goes up to a 16-speaker B&W surround-sound system, while the rear of the cabin can be optioned with two DVD/Blu-ray players specified with 10.2-inch screens.