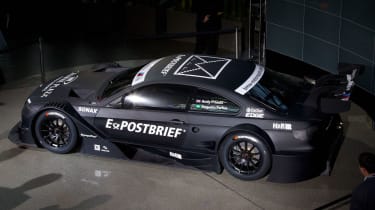 BMW and Audi have revealed their DTM contenders for 2012. BMW is returning to the German touring car series after two decades away, while its use of a two-door M3 (and the beefy Audi A5 it will rival) signals the return of coupes to DTM. The BMW M3 is dubbed a concept for now, but expect its muscular, winged look to remain largely intact for racing. It is powered by an air-restricted, naturally aspirated 4-litre V8 engine. It produces 473bhp, nearly 60bhp more than a production M3 and 30bhp more than the M3 GTS special edition. It’s enough to whisk the lighter, race-prepped M3 to 60mph in less than three seconds and onto a 186mph top speed (approx). BMW’s return to DTM comes as the sport cuts costs and spreads out of Germany to garner more international appeal courtesy of rounds held elsewhere, such as the UK race at Brands Hatch in September.  ‘There’s lots of effort financially behind such a campaign but we have to materialise it in the best possible way, and make motorsport useful for not just one market but several markets’, BMW’s Carsten Priest told us. Cost saving has entered DTM via shared parts, including a carbonfibre-reinforced plastic monocoque (which also boosts safety) and a six-speed sequential gearbox.  The Audi A5 also has a naturally aspirated 4-litre V8, carried over from the DTM A4 and boasting around 460bhp. Unlike the BMW, it’s only in sketch form for now, but it looks equally mean and the pair should be set for quite a battle next year. That’s not forgetting the C-class AMG Coupe contender we’re likely to see from Mercedes…

BMW returns to DTM with the M3