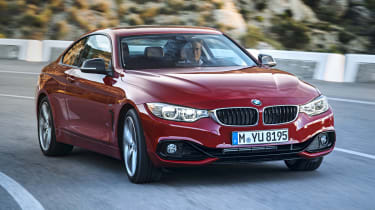 BMW has released a video of its new 4-series. It shows the all-new two-door - which replaces the 3-series coupe (and eventually convertible) - in action ahead of its world premiere at the Frankfurt motor show in September.

Despite the fresh nameplate, which is used in the BMW range for the first time, the new 4-series is unmistakably a 3-series coupe, though it’s a marginally bigger proposition than before. It is 26mm longer than old Three coupe while boasting a 50mm longer wheelbase, while its track widths are significantly larger and its suspension lower. BMW is claiming the lowest centre of gravity in its whole range, though it also claims the Four offers a ‘stand-alone design’. How much it differs from the current 3-series saloon is something we'll leave you to decide, though...

Big news is the introduction of xDrive all-wheel drive, optional over the regular rear-drive chassis on the 420i and 420d while standard on the 435d. All 4-series coupes get front and rear parking sensors, heated seats, a digital radio and leather seats as standard, while an optional M Sport package stiffens the suspension and injects some aggression into the exterior and interior styling.

BMW 4-series sales beg in the UK in October, shortly after the covers have been whipped off at Fankfurt. Prices start at £31,575 for a 420d SE. Range growth is a given, with a 4-series convertible destined to retain the folding hard-top seen on its 3-series forebear, despite the genre typically returning to its fabric-top roots. A 4-series Gran Coupe, to sit below the 6-series Gran Coupe and rival the Audi A5 Sportback, is also strongly rumoued. There will be an M Division variant in the form of the M4, which is expected to use a turbocharged straight-six engine and replaces the BMW M3 Coupe – a firm performance car favourite. It has rather big boots to fill.