The BMW 5-series receives mid-cycle update, gaining new tech and the 523bhp M550i xDrive variant in the UK for the first time 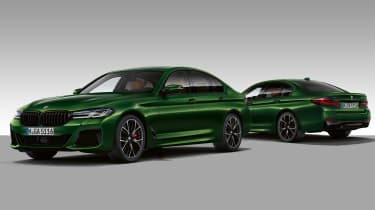 The BMW 5-series saloon and estate have been given a mid-life update, retaining the conservative style while adding a tad more edge and introducing a suite of mild and plug-in hybrid powertrains. There’s also a new-for-the-UK 523bhp M550i xDrive model to sit below the M5.

Originally launched in 2016, the current G30-generation 5-series has been an unmitigated success for the brand, selling over 600,000 units in saloon and estate forms. The updated 5-series follows the conservative approach of the pre-facelift version, negotiating its way around the somewhat dubious design choices that have been made on other recent BMW models like the larger 7-series and the new 4-series that’s due to be revealed next week. 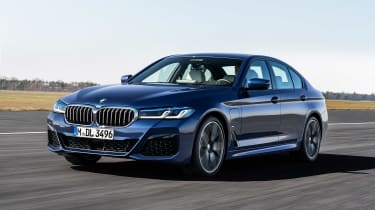 Key changes include a new nose, with slightly larger, but also sharper and more defined, kidney grilles, flanked by slimmer LED headlights that are not only available in three different forms (LED, Matrix LED and Laser), but also in two internal finishes, with a new ‘shadowline’ option available to match the darkened brightwork of M Sport models. The lower intakes are also new, with SE cars featuring a slim intake featuring metallic accents on either side, while M Sport cars get a more traditional three-opening lower section with a new mesh design. Fresh wheel designs, new rear lights and an extended colour range complete the exterior changes.

Changes under the skin of the 5-series are more substantial, with all non-plug-in four- and six-cylinder models now featuring a 48V mild-hybrid system that works like most others by supplementing the combustion engine with a small electric starter motor and generator. The set-up is powered from a 48V electrical system fed from a secondary lithium ion battery. Like other systems, it is designed to subtly assist the petrol engine under load at low rpm while also powering more power-hungry electrical elements like the optional active anti-roll mitigation system. 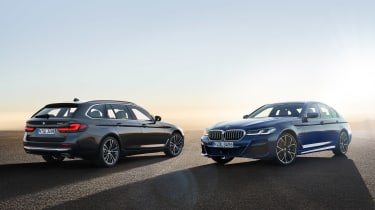 Along the familiar four- and six-cylinder engine options (520i, 520d, 530d) BMW will also offer a second plug-in hybrid model, revealing the new high-output 545e to complement the current 530e. Official figures have yet to be released for the new 545e, but we expect it to mirror the 745e, which features a peak power of 388bhp from its 3-litre straight-six petrol engine and electric motor. Production of this 545e model won’t commence until November this year, but what we will see before that is the new M550i xDrive, a performance model from BMW’s mid-level M Performance brand.

This M Performance 5-series model is already available in markets outside the UK, but has until now been kept off the order sheets to leave space above it for the more powerful M5. This has changed in part due to the M5’s availability in the UK only in Competition guise, so BMW has introduced the 523bhp 4.4-litre twin-turbo V8 as found in the BMW M850i and 750i saloon to fill the gap. As in those models, the new M550i is available exclusively with an xDrive rear-biased all-wheel drive system and eight-speed ZF automatic transmission. Performance is impressive, with the M550i hitting 62mph in just 3.8-sec, only 0.4 behind the M5 Competition, topping out at a limited 155mph. Unfortunately, the M550i will only be available in saloon form in the UK, so fast estate enthusiasts will still have to look to Mercedes-AMG and Audi for their kicks. 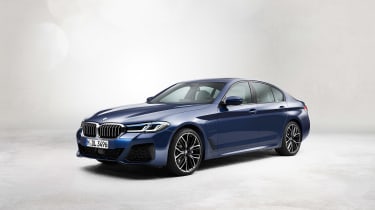 Alongside these mechanical changes, BMW has also updated the 5-series’ interior, following the lead of the larger 7-series in integrating BMW’s latest infotainment and user-interface into the older dashboard architecture of the G30 5-series. As a result, the infotainment screen has increased in size from 10.25- to 12.3-inches while, elsewhere, the interior has picked up subtle trim and material enhancements.

The previous SE and M Sport trim levels will also be joined by a new M Sport Edition trim as seen on the smaller 3-series, adding high-specification elements like BMW ‘Individual’ paint options, 20-inch wheels and unique interior trim. Buyers can build on this again with the optional M Sport Pro pack for both M Sport models, which bundles adaptive suspension, red brake calipers and 20-inch wheels (where not already fitted).

Prices have grown marginally, starting at £37,480 for a basic 520i SE which represents a £1200 rise that’s reflected elsewhere in the range. Prices for the new M550i xDrive will start from £67,595, making it seem somewhat of a bargain compared to the £98,000 M5 Competition; prices and specs for the 545e have yet to be confirmed.