AC Schnitzer’s upgrades come close to turning the M550i xDrive into an M5 rival, but not for UK buyers… 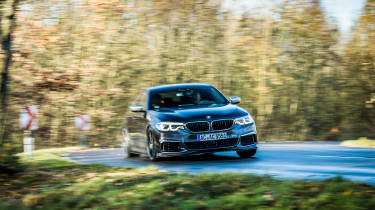 No matter how good a standard product from a manufacturer may be there will always be someone who would like a little bit extra. Be it styling, suspension, more power or just a set of sexy alloy wheels, the burgeoning aftermarket proves that there’s a customer base to satisfy. And when it comes to BMW tuning there’s one name that crops up more than most – AC Schnitzer. The Aachen firm has been tweaking BMWs for over 30 years now and here we have its take on the new G30 BMW 5 Series.

As with many recent BMWs everyone likes to have a view on the styling and while the general consensus is that BMW did a good job with the G30 generation car, if you feel it’s a little lacking Schnitzer can add a bit of extra aggression. There are additional front spoiler elements (either in PU-rim or carbonfibre, and opting for the latter increases the price by a factor of three) and there’s also a splitter that can be added that runs right across from one side of the car to the other. Following that theme are some sill extensions that seem to be popular in the aftermarket these days while at the rear there are a range of additional spoilers – positioned at the top of the rear screen and on the trailing edge of the boot on a saloon or just at the top of the screen on a Touring. The rear end can be finished off with a diffuser from which pokes a Schnitzer designed exhaust.

The exhaust can be had in a variety of styles and volumes, too, but the one fitted to this example is the TüV approved item so it’s suitably fruity without being overly aggressive. 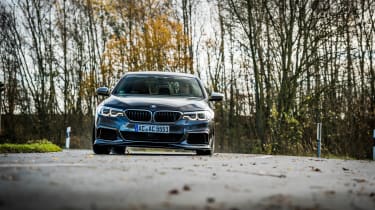 There were times in the past when Schnitzer cars we’ve driven had been too stiff for their own good but when it comes to chassis tuning these days the firm operates under the banner of ‘fast not hard’ which bodes well. On this car we have a Schnitzer spring kit that works in conjunction with the M550i’s adaptive M suspension set up and lowers the car by 25-30mm at the front and 20-25mm at the rear. When paired with some 19- or 20-inch rims (those on our test car were 20-inch Schnitzer AC1 items) it does give the G30 shape a tougher look.

Sadly, for UK buyers, the M550i isn’t offered over here but its vital stats are impressive nonetheless. It develops 456bhp and 479lb ft of torque in standard trim but by the time Schnitzer had added its performance upgrade you’re looking at 543bhp and 553lb ft – gains of 87hp and 74lb ft. Or to put it another way, just shy of an F10 M5 in the power stakes but with over 50lb ft more torque. That it’s quick should come as no surprise with 0-62mph taking 3.8sec (better by 0.2sec over a standard M550i) while Schnitzer quotes an 80-180kph (50-112mph) figure of 7.5sec, a 1.2sec improvement.

The short answer is pretty damn fast, especially for a machine that weighs the best part of 1900kg. Four-wheel drive traction means that squirting it off the line is uncomplicated, even with winter rubber fitted it just digs in and goes, but it’s the unrelenting nature that impresses most. There just doesn’t seem to be any tailing off in the way it gathers momentum, even when you floor it at an indicted 140mph it just powers up to its 155mph limiter in the blink of an eye. It sounds fruitier than standard, but not excessively so. Equipped with the TüV-approved system (there’s also a louder Export version available) it’s muted and refined on a cruise yet more strident than the BMW set up when in Sport mode, unleashing more of the V8’s offbeat warble.

There’s more to the Schnitzer package than the engine and exhaust upgrade though as the spring kit does have an effect on the way the car drives. The ride is still supple for the majority of the time, despite the 20-inch wheels, yet there’s more control and less unwanted body movement when you start to travel faster. Where the standard car starts to feel as if it’s out of its comfort zone when you start to hustle it along the Schnitzer-fettled version is keener to turn-in and is more composed.

The big ticket item here is the Performance upgrade that comes in at over £7000 while a 20-inch wheel and tyre set will see you around £4300 worse off. The styling as fitted to this car costs around £4200, an exhaust £2500 and the spring kit £460, and these prices are for parts and don’t take into account fitting. Not a cheap exercise then, but you are getting nigh-on M5 performance and in Germany the M5 is €33,600 more expensive than an M550i xDrive…