Is BMW’s conservative mid-sized exec about to undergo a controversial styling change? 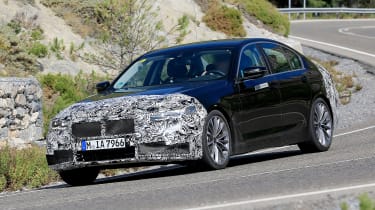 It might still seem fresh, but the current BMW 5-series is now approaching its mid-cycle update, which we should see in the flesh sometime next year. The G30 initially launched in 2017, a time when BMW had yet to produce the somewhat challenging styling elements that are rapidly spreading through the current range, some of which might well find their way onto the new 5.

The good news is that by looking closely at the familiar bonnet shut lines of the prototype in these images, the new 5-series is unlikely to pick up a grille quite as large as the one on the new 7-series, but it’s still likely to grow marginally over the current model’s. New LED headlights will also feature, with top-spec models likely to pick up adaptive laser-beam units as seen elsewhere in the BMW range. The bumpers front and rear will also be new, with fresh wheel designs completing the exterior package, but the changes should still remain far more understated than those on the new 7-series.

> Click here for our review of the current BMW 5-series

Along with its incoming aesthetic changes, we expect the new 5-series to also feature a host of powertrain refinements, with a heavy emphasis on refining the plug-in hybrid models and improving efficiency elsewhere across the range. As one of the first models to utilise BMW’s new family of ‘B’ series engines, we suspect non-hybrid 5-series models will remain mostly unchanged, with little indication of an adoption of mild-hybridisation in the works. 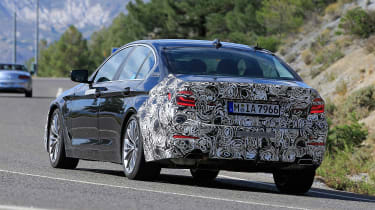 The interior will hold on to its basic architecture, with updates to the colour, trim and tech likely to be the main differentiators. BMW’s controversial new dial pack is also likely to be implemented, slipping into the dash layout much like that in the larger 7-series.

These changes will also spread to the flagship M5 Competition, as well as the 5-series Touring models. The question is whether the changes will be significant enough to keep the current model competitive with the Mercedes E-class, which is also to undergo a mid-cycle update in the near future, and other rivals such as the Audi A6 which is an inherently newer design.