BMW 5-series review - is this the best saloon in the world? - Ride and handling

BMW has long set the benchmark for sweet handling executive cars, and the new G30 is no different. It’s ultimately more about infinite capability than excitement but BMW took no chances with the latest 5-series to ensure it had a breadth of abilities that would surpass all rivals.

As a base, BMW has upgraded the 5-series’ core structure by stiffening the areas around the sub assemblies and suspension mounting points. This added stiffness has been combined with a reduction in weight and a lower centre of gravity, imbuing the 5-series with an impressively sorted chassis. 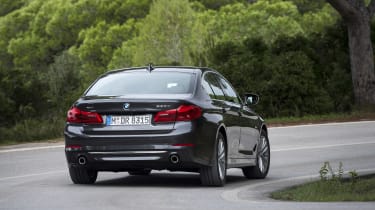 Like all cars, the choice of wheel and tyre does have an effect on the overall ride and handling, with 18-inch wheels the sweet spot size-wise as they still have enough sidewall to absorb the worst impacts without transferring them into the cabin. Bigger wheels look better, but their large increase in unsprung mass is violently felt everytime one of them drops into a pothole.

The optional adaptive dampers improve the ride quality further, but also tighten up the body control when speeds rise and ‘Sport mode’ is selected. The front end has a surprisingly tenacious appetite for apex’, with light, but accurate electric steering giving you confidence to carry considerable speed into corners. The rest of the car follows faithfully, with excellent body control over even the roughest UK road surfaces. 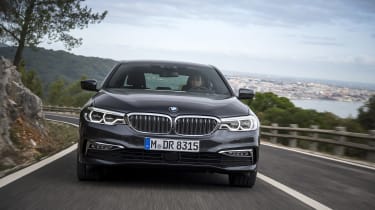 When fitted with xDrive all-wheel-drive, the 5-series’ is almost completely transparent, the rear-biased only involving the front wheels when the car feels it’s necessary. Traction is rightly improved though, allotting the 5-series impervious levels of grip regardless of the conditions. If you were worried tail out antics are now out of the question, just ask yourself when was the last time you saw a cooking 5-series on its lock-stops anyway.

On motorways and A-roads, the 5-series is just as capable, being both comfortable and incredibly refined at high speeds. BMW’s continued move towards autonomous tech is also notable, offering level two autonomy on motorways, which is to say it will, for short periods of time, combine radar guided cruise control with lane-keep assist to drive autonomously on motorways.

The only real issue is the car's size. In terms of dimensions it's almost as big as 7 Series, and on typical give-and-take British roads it occassionally feels just a bit cumbersome. There's not a much wriggle room, with the car filling the full width of the tarmac, from verge to white centre line.