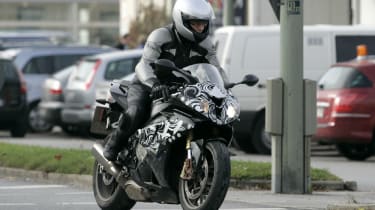 BMW has officially pulled the covers off of its S 1000 RR race bike back in April this year, and it will sprout a production model next year. We have the first images of this production model. General Director of BMW Motorrad Hendrik von Kuenheim says that the company is committed to building 1,000 units of the new model next year. Featuring a 1000cc inline-four transversely mounted between the frame rails and an upside-down front fork, the RR is rather conventional by BMW standards. This has allowed the Motorrad to keep the bike as compact as possible, which can be attested to by the fact that it has been spotted undergoing city testing in Munich last week. So far, no specifications have been given regarding power levels, but we fully expect it to be competitive with the Superbike front-runners. Traction control is also reportedly put to good use. Judging from the extensive use of (bare) carbon fibre, we'd expect the weight to be on par with the competition, as well.