BMW's new M3 is the most widely anticipated car of 2007. But how will it stand up against the RS4? 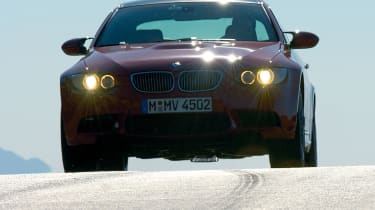 Visually it’s the Audi that makes the most immediate impact, thanks to a pumped-up look that gives the impression the A4 body is struggling to contain the hardware. It’s a style BMW perfected with the E46 M3, but one it has shied away from slightly with the E92, and during our time with the two cars in Spain it’s the Audi that attracts the most attention.

Step out of the M3 and into the RS4 and the first thing that strikes you is that the Audi feels smaller and snugger. The driver’s seat is more aggressively sculpted and the ambience is both more intimate and more overtly sporting. More cohesive too, thanks to the satnav display being integrated into the centre console rather than a secondary hooded binnacle as found in the somewhat bland and disjointed BMW interior.

The Audi’s silver starter button seems a bit OTT but it ignites the RS4’s V8 with a combative burst of revs, closely followed by a throbby idle. There’s not much in the clutch pedal effort required, but the gearshift immediately feels more mechanical and precise than the M3’s typically cartilaginous shift.

The voguish flat-bottomed wheel feels better than the M3’s bloated rim, but it takes a little time to adjust to when you’re twirling it through the hairpins, and you also quickly note that the steering is considerably less weighty than that of the M3, at least when the BMW’s helm is set to the sportiest of the three available options.

Initial turn-in response is sharper than the M3’s, and if you’re prepared to be a little creative on your way to the apex with some trail-braking or by simply lifting-off as you turn in, the RS4’s tail can be brought sweetly into play without requiring much in the way of corrective lock. However, even with the car in ‘S’ mode (Audi’s less-complex answer to BMW’s M Drive button) the stability control is keen to gather things up.

This is frustrating at first, especially as it feels as though the car has plenty left in reserve. However, when you disengage the electronic systems as far as is possible, the RS4 doesn’t feel entirely comfortable being chucked around, with that initial keenness often fading into on-limit understeer that can prove tricky to contain on tight roads. It seems odd that the all-wheel-drive Audi should struggle a little for grip on the often slippery mountain roads, but when attempting to stay with the M3 you have to conclude that the BMW seems to find fractionally more mid-corner speed and also manages to get more power to the tarmac without pushing the nose or tail wide of your chosen line.

If you buy-in wholeheartedly to the quattro ethos then the RS4’s inability to oversteer is of little consequence. It certainly makes the Audi an able and trustworthy all-weather tool, but then advances in electronic traction and stability aids will doubtless endow the potentially lairy M3 with admirable wet-weather ability. Certainly if you’re the sort that views roundabouts as recreational facilities then the Audi’s sensible shoes probably aren’t for you, but if you enjoy the discipline of driving within clearly defined limits the RS4 will deliver satisfaction, if not absolute thrills.

The brakes of both cars work hard to absorb the momentum each gains between the corners. Of the two it’s the Audi’s stoppers that look the most impressive, yet the BMW’s less showy discs and callipers do an equally good job of delivering consistent, feelsome stopping power. We couldn’t confirm whether (as was rumoured) the M3 was fitted with harder race pads in order to cope with the scheduled circuit work, but the fact that they squealed like stuck pigs at low speed is enough to raise suspicions.

Surprisingly, it’s the RS4 that sounds the harder-edged and more aggressive car, at least from inside. The engine is vocal and gritty right through the rev range, but from outside it sounds a bit flat and lacks the extraordinary tonal range of the M3’s feral cry. It doesn’t have the reach either, pulling hard and revving freely, but not quite matching the BMW V8 for ultimate urgency and top-end kick. However, look under the bonnet and it’s the Audi motor that delivers the most owner satisfaction.

Although the Spanish roads aren’t typical of anything in the UK, being either race-track smooth or shiny and extremely slippery, on the few rougher and more broken surfaces we do encounter it’s the RS4’s ride that has the sharper edges at low speed, although there’s little to choose between the high-speed body control of the pair. How much of an advantage the M3’s optional EDC suspension conveys we won’t know until we drive a standard car, although the chances of this are about as slim as seeing a Porsche 911 without PASM, such is the effect of these must-have options on residual values.

VerdictBMW will introduce saloon and convertible derivatives of the M3 in due course, competing directly with the two equivalent RS4s, although there’s no word yet on whether an M3 Touring will follow. How the M5 wagon is received will probably be the deciding factor.

On the evidence of what we’ve found in Spain we have to conclude that the M3 is the more engaging, more exciting car, yet the Audi remains hugely capable, rewarding and enjoyable. A narrow points decision then, and a far cry from the walkover BMW enjoyed with the E46 M3. The M Division must be awaiting the C63 AMG with some apprehension…