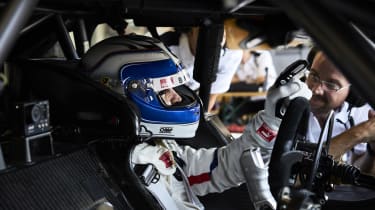 On August 24th the DTM circus arrives in Italy for the seventh round of the season at Misano. Among them will be Alessandro Zanardi, making a guest appearance in a BMW M4 - and as BMW is revealing in the run-up to the event, it’s no ordinary M4 DTM. The car is fitted with special hand controls to allow double-amputee Zanardi to compete.

It’s now seventeen years since the CART accident which required the amputation of Zanardi’s legs, and his career since has been as remarkable as the two CART titles he achieved in 1997 and 1998, taking four gold medals in para-cycling in the last two Paralympic games.

Zanardi has also continued with motorsport and achieved a series of wins in the World Touring Car Championship in a BMW 320si equipped with hand controls, and has subsequently raced a BMW Z4 GT3 in the Blancpain series similarly-equipped.

The M4 DTM he’ll be racing at Misano is a further development of these controls, and some fascinating engineering has gone into the car to allow the Italian to race without use of any prostheses. 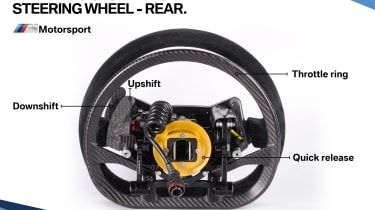 This starts with the steering wheel. Behind an otherwise standard-looking three-spoke racing wheel is a carbonfibre ring of similar diameter which serves as the throttle. It’s hooked up to the same sensors as a conventional throttle pedal and is operated by pulling the ring towards the wheel to accelerate, and can be used with either hand.

Inset on the right-hand side of the wheel are paddles for both upshifting and downshifting, but as downshifting is more often associated with braking, Zanardi can also change down using a switch on the other main hand control element: a large brake lever.

This lever is mounted to the right of the wheel, in the centre console area, and replaces the system Zanardi has used in the past, which involves a conventional brake pedal with a permanently-attached prosthetic leg. The new system requires the brake lines be extended to the lever and also reverses the operating principle of the brake cylinder, with the handle now applying pressure to the cylinder rather than exerting tensile force, as on a regular M4 DTM master cylinder.

BMW has also adjusted the pressure required to activate the brakes, with a maximum 70kg of force required rather than the 100-120kg for the standard brake pedal - and the extra leverage of the lever compared to the pedal also improves Zanardi’s control. 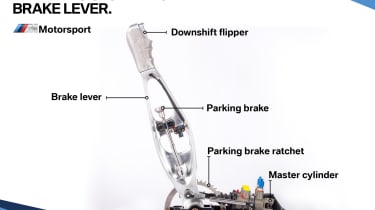 With no throttle and no brake pedal, the only one left would be a clutch pedal, required in DTM to pull away in the pits, come to a halt, and leave the line during a race. With a centrifugal clutch, calibrated so performance is little different to the standard race car whether pulling away slowly or doing a full-bore standing start, a pedal is no longer required, leaving the footwell empty.

The modifications are fascinating and illustrate how far technology has moved on in recent years, allowing drivers like Zanardi, and more recently British F4 driver Billy Monger, to compete wheel-to-wheel despite suffering terrible accidents.

Zanardi will now spend some time testing the car and familiarising himself with the new controls ahead of the racing in a few weekends time - and he’ll also get a chance to test the technology at next year’s Daytona 24 Hours.

Book your place on the next evo Track Day here...