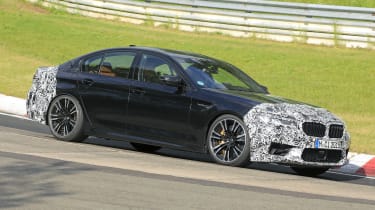 Arguably, the BMW M5 has never been better than in its current F90 Competition form. It’s stupendously fast, agile (for a two-ton saloon) and beautifully constructed, and yet has never really left a huge impression with us in the evo office. This is hopefully something BMW’s M division hopes to change, as it prepares an updated version alongside the range-wide 5-series mid-life update.

First spied testing late last year, photographers have caught a glimpse of the facelifted car once again. Set to go up against the updated Mercedes-AMG E63 when it’s launched later this year, the mule doesn’t appear to sport drastic design changes, with camouflage disguising only the front and rear bumpers.

After the rumours, spy shots and questionable BMW concept cars, you’d be forgiven for worrying that the new M5 would perhaps lose the underlying conservatism that defines its ultimate Q-car status. The good news is though, that unlike the 7-series and incoming 4-series, the next M5 looks certain to keep its current grille size, but be surrounded by new headlights and front bumper. A tweaked intake design can be seen on the most recent test mule, but with the 4.4-litre twin-turbo V8’s prodigious appetite for air, a very open front bumper will have to be retained.

The rear bumper is unlikely to change much, save for a fresh set of tail lights. Instead we suspect it will be inside that’ll gain the biggest update, with previous 5-series spy shots uncovering a new dashtop screen layout with a larger display and bigger driver’s information screen. Fresh colours, wheels and interior trims will also be part of the update as usual, so too an update to the latest autonomous and safety features. 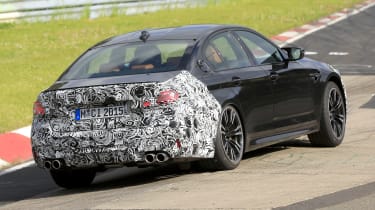 Those wanting a power bump on the current M5 Competition’s 616bhp might be disappointed, as the recently revealed X5 M, X6 M and M8 Competition models all now feature the current S58 with that same specific output. We don’t expect things to change with the M5’s update, rather the M5 is more likely to pick up a more focused CS trim level, corresponding to that of the previous M3 and M4, and likely the current M2.

The new M5 Competition, alongside the rest of the 5-series range, will be along some time this year, and should arrive on sale before the next-generation M3 and M4, which are sure to raise a few eyebrows with their, um, distinctive new kidney (or should that now be coined oversized lung?) grilles. Be in no doubt, there will still at least be one under-the-radar M division saloon on sale.