Click the right buttons and the M5 will beat all major rivals from the lights, not to mention most modern supercars 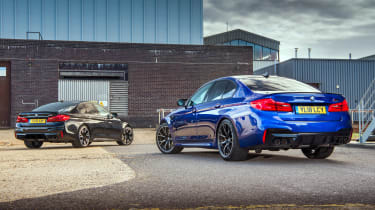 The standard M5 wasn’t exactly a sluggard, evidenced by the fact the Competition knocks just a tenth off the 0-62mph time, clocking the benchmark in 3.3sec. However, by the time the Comp hits 124mph it’s three-tenths ahead of its less powerful M5 sibling, which is useful to know.

In all honesty, any performance gains are hard to detect, the Competition accelerating with the same deranged intensity that puts it toe to toe with some seriously exotic sports cars. What the Comp does add is a little extra spice in the form of a new Sports exhaust. This set-up allows the V8 to find the full baritone bark of its voice, and while it’s not as bombastically loud as the Mercedes-AMG E63 S, the M5’s more restrained soundtrack is more in keeping with the Q-car character of a true supersaloon. 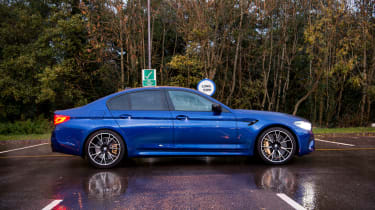 Turbo lag is only hinted at with BMW's S63 V8, and once engaged and under full throttle feels good for every one of its 616bhp. The flat torque curve barely recedes at high revs too, keeping the engine's urgency strong even if you don't really need to keep it in that low gear for the performance.

The transmission only accentuates the almost endless-feel to the engine, with short ratios and super slick changes that do a good impression of DCT-like changes. Keep your foot buried for more than a moment and you'll be quickly exceeding UK speed limits to an alarming rate though, making it a sometimes frustrating car to drive on challenging roads.