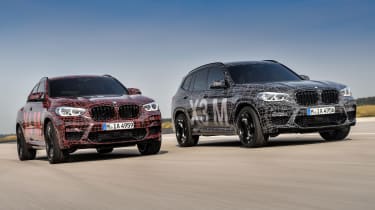 The mid-sized BMW  X3 and X4 are about to undergo the full BMW M treatment for the first time, offering M3 levels of performance in a more practical family-friendly package. Teased by BMW in a new set of images, the pair made their public debut at the Nürburgring over the weekend in prototype form, and now BMW has given us some insight into what lies underneath.

As you might expect, power will be sent to all four wheels, but we’d be surprised to see the application of an M5-like ability to revert to rear drive. BMW has instead mentioned a focus on accurately distributing the power and torque between the four wheels without distinct power loss, also utilising an electronically controlled limited-slip differential mounted on the rear axle. This to us sounds like an adoption of a proper torque-vectoring system, shuffling power between all four wheels depending on which has the most traction. BMW shrewdly hesitated to mention whether the pair will use a dual-clutch or standard torque converter automatic gearbox.

Underneath the body-disguising wrap the X3 and X4 will both feature more aggressive styling, with an opened-up front bumper allowing for extra cooling, deeper side skirts and a set of quad exhaust pipes poking out of the rear bumper. Inside, expect the usual BMW M upgrades including new seats, steering wheel and updated trim materials.

Although these two are not what we would usually consider to be ideal BMW M cars, the pair do get pretty close to answering our calls for a BMW M3 Touring. The other thing to note is that like the X5/X6 M twins before them, these SUV variants might also shine a light on what to expect in the next-generation BMW M3 and M4, as its new straight-six engine, and whatever transmission is attached to it, will likely be shared.

The X3 M and X4 M won’t have the performance mid-sized SUV arena to themselves, though, as the aforementioned Mercedes-AMG GLC63, not to mention updated Porsche Macan Turbo and Alfa Romeo Stelvio Quadrifoglio all impress with their adept, even playful handling characteristics. We’ll know more later in the year when the pair are revealed in full.