Brisk with an impressive chassis but, like most SUVs, short on thrills 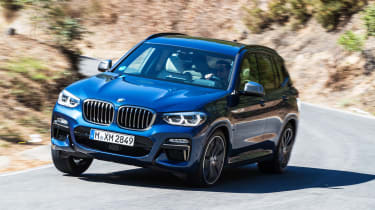 When BMW released the X5 back in 1999, the first SUV to really sacrifice its off-road ability for on-road behaviour, nobody could have predicted just how popular performance 4x4s would become. Now, as well as BMW, almost everyone makes a high-riding four-wheel drive that’s better suited to the Green Hell than the green and pleasant land.

The latest offering from the Bavarian manufacturer is the X3 M40i, a car to rival Audi’s SQ5, Porsche’s Macan GTS and Mercedes-AMG’s GLC 43. The X3 M40i isn’t a full-blown M-car, but it does benefit from some M-performance tweaks much in the same way as the M140i and M240i. 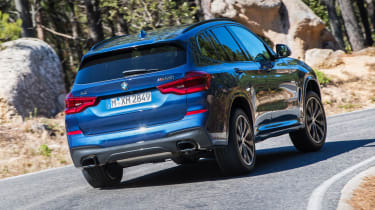 Because the X3 M40i isn’t from the actual M division, it doesn’t get a proper M engine. Instead, the M40i is fitted with BMW’s latest 3-litre straight-six, the B58. It’s the same engine that’s fitted to the other current ‘40i BMWs, with a single twin-scroll turbo and variable cam timing. It produces 355bhp and 369lb ft of torque, an extra 20bhp more than the same engine makes in the M240i but the exact same amount of torque.

Like the entire European X3 range, the M40i is four-wheel drive and has an eight-speed automatic transmission. However, one advantage that comes with the all-important letter M in its title is launch control. That helps the M40i accelerate from 0 to 62mph in 4.8sec. Top speed is limited to 155mph.

Manufacturers usually throw every bit of chassis technology they can at SUVs to get them to just show hints at being a competent performance car. It’s not surprising to see adaptive dampers, four-wheel steering, variable anti-roll bars or torque vectoring systems in modern SUVs. The X3 M40i doesn’t quite have the full complement of chassis trickery, but it’s not far off.

Firstly, there’s a variable four-wheel drive system that actively sends torque to whichever axle needs it most. BMW claim that the M40i’s system sends drive to the rear axle far more readily than the systems on lesser X3s. The back axle is managed by BMW’s Performance Control rear differential that varies the torque going to each of the rear wheels. Adaptive dampers are also available, but they are optional.

Much like the latest 5-series and 6-series GT, the X3 has a refined and solid feeling interior. But, the M40i is slightly different when compared to its saloon counterparts; there is still very little in the way of tyre or wind noise, yet the engine is always audible. Because the M40i has sporting pretentions, BMW has made sure you can really hear the straight-six’s growl and bark. There are even some pops and crackles when Sport driving mode is selected, which is either totally unsuitable for an 4x4 or completely hilarious depending on how seriously you take the concept of a performance SUV.

The noise isn’t quite as remarkable from the interior as it is from the outside. It starts with the same metallic timbre that the current M3 and M4 do and settles to a busy rumble. Ok, it isn’t the most pleasant noise but it is loud and aggressive enough to make the X3 M40i seem quite menacing.

Appropriately so, too; the X3 M40i’s acceleration is remarkably brisk. It finds great traction off the line and the body’s pitch is well contained, so very little forward momentum is wasted by the rear end squatting and the nose raising.

That same control is felt in the corners, too. Roll is minimal even when you enter corners at a respectable pace, which you can do as there’s impressive turn in grip and the chassis responds dutifully to some fast and direct steering. 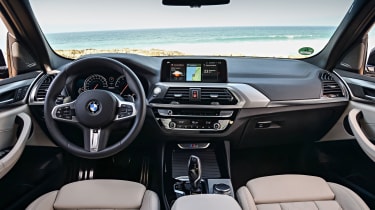 The only thing holding you back when entering a corner is the gearbox, it seems reluctant to change down quickly enough, and sometimes you have to turn in a gear higher than you’d initially hoped. Upshifts are fast and crisp enough though to - almost - make up for it.

In most corners, from apex to exit, the X3 M40i is all about traction. In fast corners it grips and grips as you accelerate forwards in an impressive, but rather clinical manner. You can induce some understeer in slower, second-gear bends as the front unloads slightly when you apply full throttle.

The X3 M40i is, without a doubt, very impressive, much like its rivals. But just like its competitors there isn’t a lot in the way of fun or thrills. It seems a shame that BMW hasn’t stamped its mark on the X3 M40i and given it some of the typical adjustability and interactivity that’s apparent in other performance BMWs. Instead, it's safe, dependable, but slightly uninspiring.

The new sporty X3 costs £50,530. That is, to no-one's surprise, very competitive when compared to the vast array of other small, sporty SUVS.

Audi’s new petrol SQ5 is a little more expensive at £51,200. The Audi matches the BMW’s torque, but its down 6bhp and is 0.6sec slower to 62mph. The Audi behaves in much the same way as the M40i – grippy and safe – but the BMW feels livelier on turn-in. 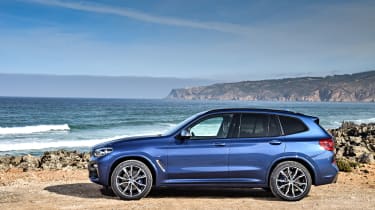 The Porsche Macan GTS has the same power and torque as the X3 M40i, yet it’s slower in the dash to 62mph by 0.4sec (or 0.1sec if fitted with the Sport Chrono package that brings with it launch control). The Porsche is also the most expensive of the X3’s rivals at £55,188, but it does have an ever so slightly more playful chassis.

> Read our review of the Porsche Macan GTS