Are the M140i and M240i the ideal performance cars for UK roads? 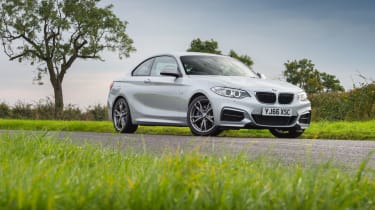 If you’ve been in a coma for the last twenty or so years, you’ll probably be disappointed to learn that the new M140i and M240i are not equipped with a 4-litre V8 like the 740i and 840i of old. However, you shouldn’t be too downhearted as these two cars replace some of the finest cars that have come out of the non-M side of the BMW factory, the M135i and M235i.

Visually, only a badge that separates the new cars from their predecessors as it’s under the skin where the real changes have been made.

The M140i and M240i are not mechanically identical, but they’re not far off. The engine, transmission and suspension architecture are shared, but it’s in the calibration where the two cars differ. BMW was relatively happy with the M235i, and so, in creating the M240i it's kept the coupe much the same as before. However, BMW saw room for improvement in the M135i and has taken the opportunity to retune the suspension to instil some of the coupe’s character in this new hatchback. 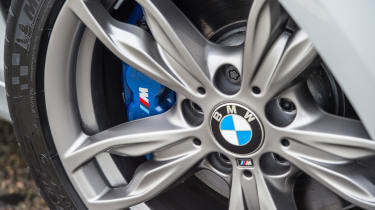 Both cars we tested were fitted with the optional Adaptive M Sport suspension (£515). The dampers allow for a softer, more comfortable ride than the standard fixed rate dampers when the cars are in Comfort mode. Then, with the cars in Sport or Sport+ the, M Sport dampers are then firmer than the ordinary ones. However even with the set-up of the adaptive dampers, BMW has made sure the M240i coupe is the more focused of the two.

At a glance, the new engine doesn’t differ much from the old one; both are described as using a turbocharged 3-litre straight-six. In fact the new engine is slightly bigger with a swept capacity of 2998cc rather than the old engine’s 2979cc. The new engine’s single twin-scroll turbo is now fractionally larger too, helping increase power by 14bhp to 335bhp. Torque is significantly increased too from 332lb ft to 369lb ft.

The new engine is a real joy to rev right to its 7,000rpm rev limit; it doesn’t lose any energy as it gets close to the red line and it continues to emit a distinctly six-cylinder timbre. Sadly, it sounds best from the outside.

The standard gearbox in both cars is a six-speed manual, and it really suits the torquey nature of the new engine; there’s impressive acceleration, even in the higher gears. The gear change isn’t the slickest of actions; it feels too rubbery and the centre armrest puts your arm at an awkward angle. However, there’s a much greater connection to the drivetrain with the manual gearbox than with the optional automatic. 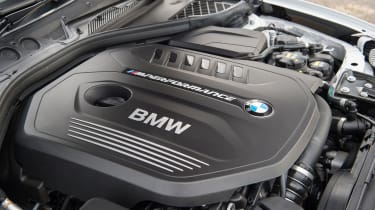 The eight-speed torque-converter auto available in the M140i and M240i is the same ZF gearbox as in the old car and in, well, almost everything. How this transmission behaves in different cars can be quite dramatic, but it’s rarely as faultless as it in these BMWs; it’s so incredibly easy to adapt to while also effecting quick, direct changes. It can be a bit too abrupt though, and in the wet the severe changes can cause the rear tyres to lose traction.

Officially the automatic is the quicker of the two gearboxes, allowing both cars to accelerate from 0-62mph in 4.6sec, 0.2sec quicker than when fitted with the manual transmission. But on the road, the automatic doesn’t feel any quicker. While the gear changes themselves are quicker, the smaller amount of gear ratios in the manual means you make fewer actual changes. With no noticeable difference in speed, it’s the more engaging manual gearbox that’s the most satisfying to use.

The differences between the way the hatchback and the coupe drive aren’t immediately obvious. With the Comfort driving mode selected both ride exceptionally well while maintaining a respectable degree of control. There is some body roll but its natural without being excessive, and both cars deal with undulating roads at moderate pace without any drama at all.

Sport and Sport+ don’t change the BMWs’ attitude dramatically, however each input you make has a more significant effect on the car. It’s most obviously felt on the exit of a corner where an application of the throttle really stimulates the rear axle and helps force the car around a corner.

It isn’t until you push harder that the M140i starts struggling to cope with the demanding roads and more determined inputs that its coupe brother simply takes on the chin. The M140i, although never truly flustered, feels heavier over the rear axle and it takes a fraction longer to regain composure after a severe crest. There is plenty of traction, but this slight lack of poise means you don’t have the confidence in the rear axle to really attack a road. The M240i however stays collected, even as the pace increases. There’s a huge amount of grip too; you can get on the power incredibly early, confident the rear tyres won’t suddenly break away. 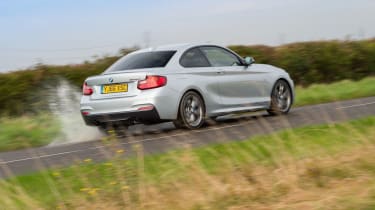 That’s not to say both cars won’t play the hooligan, should you wish. With the traction control fully deactivated, both the M140i and M240i will slide around as you would expect from a 335bhp rear-wheel drive car. Be too clumsy with the steering and you can induce some understeer; there simply isn’t enough information communicated through the steering to allow you to nudge up to the front tyres’ limit. However, once they have lost grip you’re immediately made aware and, thanks to the amount of power and torque available, any understeer can be corrected with a prod of the throttle.

Neither the M140i nor M240i come with a limited slip differential as standard, but an optional LSD is available for £2520. So, although the chassis on both cars does its best to keep any resulting slide predictable, the lack of LSD can make regaining traction a little bit frantic. On wet tarmac traction is limited and both cars will easily spin their rear wheels. As the speeds are lower though, less is asked of the chassis and the M140i and M240i feel more predictable. With traction reduced, the lack of an LSD is less of an issue too and the transition back into grip is less abrupt.

Both cars are an ideal fit for UK roads. Their compact dimensions mean the opportunities to exploit their attributes are plentiful, and only single-track roads feel too narrow. The significant amount of power and torque the new engine puts out means that they never feel out of their depth on wide, open roads either.

The M140i starts at £31,875 for the 3-door model. A more practical 5-door body is available but is marginally more expensive at £32,405. As impressive as the price is, especially considering its power and torque figures, the M140i isn’t the only hatchback that costs £30,000 or so with over 300bhp. Ford's Focus RS is one of our favourite hot hatches of the moment and it outguns the M140i with 345bhp. The Focus might be heavy but its active torque vectoring transmission and incredibly taut chassis make it great to drive.

>Click here to read our review of the Ford Focus RS

VW fields two cars that the M140i needs to worry about. The Golf R is an impressive tool, combining pace, quality and fun into the ever-practical Golf body. However, if it's thrills you want the Golf GTI Clubsport S offers a level of grace and fluidity that’s rarely seen in a car for less than £100,000. It may compromise on practicality, having no rear seats, but it more than makes up for that in sheer enjoyment.

The M240i is more expensive than the hatchback, costing £33,955. However its rivals aren’t so closely matched. The Audi TTS is over £4000 more expensive, has less power, is smaller and less practical, and isn’t as fun to drive. The Nissan 370Z Nismo’s chassis might be slightly more controllable than the M240i’s but the engine is gruff and coarse by comparison to the BMW’s. It's also a two-seater only, and it's more expensive.