It might be an answer to a question nobody asked, but viewed as an engineering exercise the rapid X6 M is deeply impressive 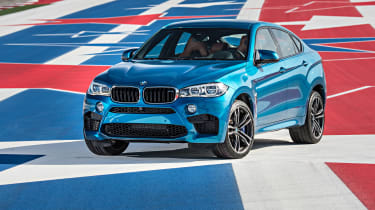 The most powerful version of BMW's SUV coupe. It’s mechanically identical to the new X5 M, which will also arrive in the UK in April this year, although the X6’s plunging roofline carries a £2900 premium.

For many people the very notion of a tall, heavy SUV wearing the hallowed M badge is nothing short of sacrilegious, but BMW’s performance division has long since broadened its remit well beyond stripped-out, focused sports coupes and saloons. As a sub-brand M had far too much commercial potential for it to remain pure and unexploited.

The X6 M's drivetrain is largely the same as before. That means eight cylinders and 4395cc of capacity, boosted by a pair of turbochargers. With 567bhp the second generation BMW X6 M outpunches its closest rival, the Porsche Cayenne Turbo S, by a full 5bhp, and sprints to 62mph in 4.2 seconds.

The engine is a true powerhouse and there’s very little impression of those turbines needing a second or two to respond to a throttle input. The eight-speed gearbox works very quickly and without fuss, too, which just allows the big V8 to get on with doing its thing.

The throttle map in Efficient mode kills response, which means the driver has to plunge the pedal much further than seems necessary. Better to accept that a car such as this one will never be anything like efficient and just enjoy the sharper response of Sport mode. 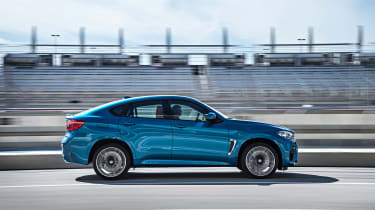 Indeed, any machine that weighs 2.3 tonnes and is capable of altering its kinetic state from completely stationary to travelling at a mile a minute in a scant four seconds will inevitably require serious levels of active cooling. The X6 M is a remarkable feat of engineering – not a great deal less than a suspension of physics – although it does have to be acknowledged that the outcome is almost entirely pointless.

Compared to the first generation X6 M, this new model has gained 20bhp, but fuel consumption has been reduced by 20 per cent. Its chassis also runs more front camber and stiffer bushings at the rear in an effort to sharpen the dynamics. 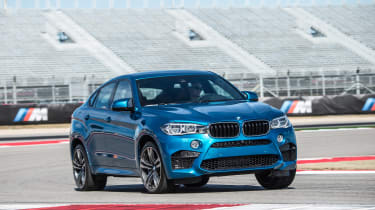 Alarming. Floor the throttle from low speeds and the X6 M accelerates hard. It doesn’t feel face-bendingly quick in the way that a similarly powerful supercar would do, but the driver is very well aware of just how much energy is being spent in order to overcome such massive inertia with quite so much disregard for good sense.

From the lofty driving position the view ahead is every bit as commanding as an SUV driver would hope. The seating position itself is very good, with lots of adjustment available in the steering rack and the pedals are way out ahead, rather than somewhere beneath your knees, van-like.

There’s a pleasing directness to the steering and very little slack, although even when the front tyres have given up their purchase there is nothing approaching feel. What there is, though, is an uncanny level of agility. We were able to try the X6 M on track – in itself an entirely irrelevant exercise, but useful to prove a point – and the way in which the car can be persuaded to tighten its line after the onset of understeer, be it through a lift off the throttle or a gentle brake application, is truly impressive. It means the car has balance and adjustability. For such a weighty brute that’s no mean feat.

There is good body control and roll resistance for a car of this height and mass, but the driver never forgets that he’s hustling a full-scale SUV. Under power at the exit of tight corners the intelligent four-wheel drive system will divert enough torque to the rear axle to induce a slide. The X6 M will oversteer – you’ll not read a less relevant clause this year.

The ride quality is just about settled enough for this car to play the daily hack, but over particularly broken and rutted surfaces the driver is aware of just how much support there is at each corner. 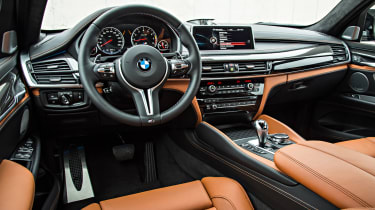 The X6 M might just have one of the best exhaust notes of any SUV to date – in fact, it makes an M3 sound flat and monotone.

Despite that coupe-like roofline there is just about enough space in the rear bench for a six-footer to sit comfortably, while the cabin quality is worthy of the near six-figure price tag. The design itself may be quite fussy, but certain touches – such as the deployable dashboard-mounted speaker – are neat reminders that this is a very expensive machine.

There's no way of sugar-coating this: The X6 M starts at £93,070. That is, as stated, £2900 more than the mechanically identical X5 M but usefully cheaper than the Porsche Cayenne Turbo S with which it trades performance figures - one of those will set you back a full £118,455, albeit with even greater badge appeal than the M-branded BMW.