Can a 547bhp M Division makeover turn the X6 into a more loveable car? 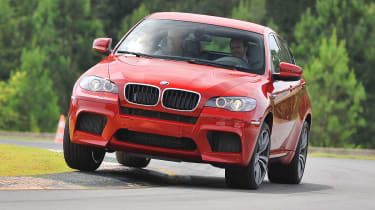 Let’s get the bad news over with first. This will leave plenty of space for the good news that must inevitably follow when you’re talking about a new BMW powered by a twin-turbo 4.4-litre V8 with 547bhp and 502lb ft of torque and which accelerates to 62mph in 4.7sec and has a top speed of 171mph.

The bad news is that the above stats belong to the X6M, on paper the most wrong-headed idea BMW’s Motorsport division has had in its mostly glorious 37-year history. Indeed, it appears to be a flat contradiction of the thing that, at one time, it vowed it would never do: an SUV. (In fact it’s done two – there’s an X5M as well.) From this flows the other supposed M-badge no-nos: turbocharging, automatic transmission and four-wheel drive.

Then there’s the timing. Could there be a less opportune moment, as the world attempts to extricate itself from the worst recession for 50 years, to launch a monstrously powerful 2.4-ton leviathan clearly aimed at sticking one on the Cayenne Turbo S and Mercedes ML63 AMG? M Division boss Kay Segler says they aren’t rivals (for the coupe-themed X6M at least) but on price and performance they clearly are.

At the press conference for the launch of the new M-cars in Atlanta, just over the state border from the factory that will make them in Spartenburg, North Carolina, Segler shares some other remarkable insights: that they’ve wanted to do a high-performance SUV for ten years but until now haven’t had the technology to carry it off; that people had huge doubts about the first M5 25 years ago before recognising its greatness and the same will be true of the X6M; that the M Division these days seeks innovation, new technologies and niches within niches as part of the means to provide pure driver involvement; that the X6M is the only true sports car among SUVs; and that if it says ‘M’ on the back, it truly is an ‘M’.

As if to ram the point home, we’re left to ponder the claim that the X6M has lapped the Nordschleife faster than the previous generation (E46) M3 as we’re ushered out into the humid warmth of an overcast Georgian afternoon to do our worst over half a dozen or so laps of the famous Road Atlanta circuit. It’s a tasty little track that climbs, swoops and wriggles its way through 2.54 miles, with two decent straights, and it has been home to some epic superbike battles over the years.

There’s an air of expectation that some kind of miracle is about to unfold. After all, the regular X6 handles brilliantly for such a bulky vehicle, a fact that did much to puncture the doubts of a sceptical media. Certainly, the X6M looks like it means business. Sitting on 20-inch rims and with a nose remodelled to incorporate gaping air ducts to cool the engine and larger brakes, it’s a suitably immense and intimidating sight in any rear-view mirror. And you’d have to be driving something genuinely nippy to make the image shrink. On the rare opportunities to open it up on the way to the circuit, the X6M’s twin-turbo V8 and tweaked six-speed ZF auto made mincemeat of the 2380kg kerb weight, the big car surging ahead with an effortless, torquey brutality. A glimpse of greatness?No. On the circuit, its weight (115kg more than the next most potent X6, the xDrive50i) is immediately apparent, not as a damper on the way it demolishes the straights or the speed it can carry through the turns, but the strain its speed and weight put on the sense of poise, balance and agility so impressive in lesser X6s. Braking hard from 140mph on a downhill straight that feeds into a tight left-right combination, the X6M feels as if it’s standing on its nose and unsettled at the rear, making it hard to judge the correct amount of trail braking into the first part of the turn – a necessary technique if you’re going to have any hope of quelling the understeer that dominates the chassis balance, even with the electronic traction regimes switched off. Good as the clever Dynamic Performance control system is at shifting torque between all four wheels to maximise grip and traction, it restricts the range of expression for the driver to a small band of throttle-induced neutrality to ever-increasing amounts of tyre-squealing understeer. In the dry at least, using the power to push the tail wide even by a few degrees simply isn’t possible.

Which rather removes the fun. As does an engine note that, at full tilt, somehow manages to make the big V8 sound like a curiously dull four-cylinder. Thankfully, on light throttle openings it’s whisperingly quiet. The excellent body control, supple ride and comfortable (if far from spacious) cabin add to the X6M’s undoubted ability to mix serious ground-covering pace with excellent refinement and habitability. But then much the same could be said for the £20K cheaper xDrive50i, which isn’t that much slower and sounds like a proper V8. If you want a quick X6, that remains our recommendation. The X6M may be fast, but it’s an even worse idea than we feared.