Scared off by the rising prices of historic hot hatches? Here are the 90's icons you should buy before it's too late. 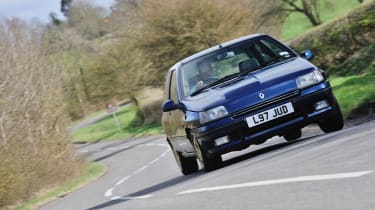 If you’ve sat back and watched in amazement the rise in values of classic 1980s hot hatches, then you may already have left it too late to acquire one. Led by the 205 GTI 1.9, but with Renault’s 5 GT Turbo and the hardy Mk2 VW Golf GTI in close company, the ’80s performance hatch has become the latest ‘affordable’ classic. However, with values of the best 205s now soaring over £20,000, the obvious place to look for more realistic alternatives is the following decade: the 1990s.

The ’90s was a decade of mixed fortunes for the hot hatch. On one hand the breed nearly became extinct altogether as thefts, insurance costs and fashion conspired to turn manufacturers and buyers alike towards a new wave of coupes. But it was also the decade that saw the arrival of genuine evo greats, such as the Renault Clio Williams. These were more habitable, safer, more capable cars than their predecessors, but still with that raw edge and involvement often missing from their modern-day counterparts. 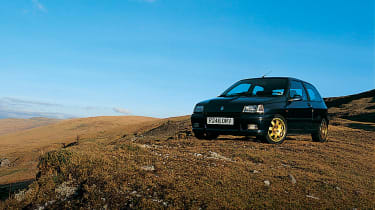 The Williams may be over 20 years old now, but this car is arguably still the finest exponent of the small hot hatch there’s ever been, 205 included. In fact, if there’s one car to really put the wind up the 205 GTI in every sense, it’s the Williams: prices for the best cars are already strong. And remember, over its three iterations it was the Williams that introduced us to the reality of a solid 150bhp in a small French hatch.

Richard Northrop, from the excellent community site williamsclio.co.uk, paints a picture of surging values: ‘This last year they’ve gone crazy – or at least the “1” has. Tatty ones have more than doubled and can now be five grand, while the really good cars, with less than 50,000 miles on them, can be £25,000. The trend I’ve noticed now is that most of the good cars go to auction; they’re seen as an investment, and owners are starting to restore rather than just get rid.’

But the path to a good Williams is fraught with difficulty: ‘Parts are becoming hard to find – there are lots you can’t get now. Mechanically they’re okay, but the body lets them down – the rear arches and sills are terrible for corrosion, and the “3” seems to be the worst for that.’ 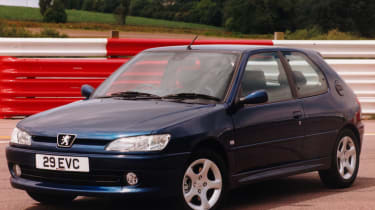 Such fanatical interest is anathema to the world of the Peugeot 306 GTI 6. Sure, they weren’t numbered, or a homologation special, but the fabulous 306 ruled the hot hatch world in its lifetime as convincingly as anything before or since. Somehow, this isn’t currently reflected in values. Stuart Farrimond is the chairman of the Peugeot Sport Club UK (pscuk.net): ‘The 306 is still in banger territory with most around £500-1500. The GTI 6 can have engine problems, and they do suffer from corrosion in awkward places. So that – along with the engines once going into 205s – has meant a lot being scrapped.

We only had 40 turn up to our recent Pugfest day, and remember the most recent was only made in 2000. In fact, we’ve stopped putting them on our club stands because people either tend to think they’re too modern or just an old banger. Even the Rallye version isn’t worth much more, due to the same corrosion and engine issues. Having said that, we’re starting to get more chatter on the forums and interest in the club about the cars, and I wouldn’t be surprised if values rise significantly over the next few years. I can’t see them ever going over £10,000 though, but I might be wrong!’ 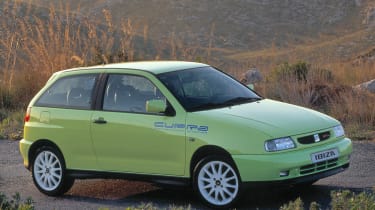 Remember those crazy little SEATs in the wild colours and with the white wheels? The Mk2 SEAT Ibiza Cupra, to be precise, was a homologation special for SEAT Sport to go rallying, – something it did with great success in the mid- to late-1990s. Just ask yourself, though, when was the last time you saw one? Mark Forbes is from seatcupra.net and tells a story of a car almost forgotten: ‘There’s not a great deal of chatter about Mk2s in general – it’s not a burgeoning scene. Pricing is anyone’s guess: they don’t come up for sale very often, and tend to go quickly when they do. Prices can range from hundreds to a couple of grand, but it’s finding one that’s hard.’

> Click here for our run down of forgotton hot hatches

The world of classic cars is a fickle one: if a car has all the right ingredients of perception, image, ability and desirability, it can ascend to that hallowed classic status where expenditure becomes justified and the ‘for sale’ advertisements ever-more pretentious; if not, it can simply fall off the cliff into oblivion.

With more attainable performance cars, such as these hot hatches of the 1990s, the fall from ‘latest hot property’ to ‘cheap fast car’ territory can be more pronounced than most. Many of these cars are unlikely to recover from the years of abuse and neglect, and unfortunately ’90s cars seem no more immune to the issues of corrosion, fragility and parts supply than equivalent vehicles from preceding decades.

All the more reason now to snap up one while you still can, whether that’s joining the Clio Williams investment trail or taking a punt on something more below the radar – a Peugeot 306 Rallye, for example. Whatever your choice, given the manner in which these kinds of cars drive, it’s unlikely to be a boring home for your cash.