We've put together a gallery of every generation of Golf GTI, fresh from evo's archives 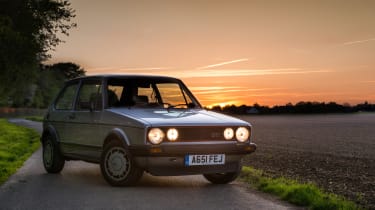 Volkswagen has just unveiled its latest Golf. Very much a facelift rather than an entirely new car, it enjoys a blink-and-you’ll-miss-it restyle, a new equipment roster, and refreshed engines and infotainment options.

It also, just like every generation of Golf before it, includes a GTI model. While the VW Golf GTI is no longer as startling as it was when the first model debuted in 1975 at the Frankfurt motor show, its evolution curve has broadly followed – or possibly dictated – that of the market as a whole.

The Mk1 Golf GTI was initially conceived under wraps, but quickly gained approval from VW’s bosses and went on sale in 1976. UK deliveries only officially began in 1979 but the car was already making a strong impression for its blend of practicality, performance and handling – three facets that have always remained a constant in the hot hatch market.

The Mk2 Golf GTI followed, growing in size and maturity and also in performance. For some, this more honed, refined take on the GTI still represents everything that makes the Golf GTI great; a more complete all-rounder than the first car but still delivering its performance from a lightweight shell with chunky, timeless styling.

Sadly, the two generations of GTI that followed, based on the Mk3 and Mk4 Golfs respectively, lost some of that early sparkle. The Mk3 GTI was heavier and more aloof and early Mk4 Golf GTIs were simply slow – slower even than the Mk1. That changed when the Mk4 GTI gained a turbocharged 1.8-litre engine, which in turn ushered in a turbocharged format seen in every GTI since. 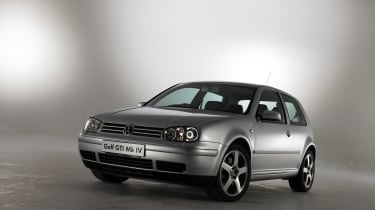 The GTI’s slight dip wasn’t too much of a tragedy however, for two reasons. Firstly, both Mk3 and Mk4 Golfs were offered with considerably quicker (and more entertaining) six-cylinder variants: the Golf VR6 and the first Golf R32.

And secondly, they were replaced by the Mk5 Golf GTI. In a stroke, the Golf GTI’s best qualities returned, but in a more complete package than ever. It was quick, with a 197bhp engine – we timed one at 6.7 seconds to 60mph when the car was new. And VW regained its knack for styling, too. While the Mk5 now looks a little rotund next to later Golfs, it was slick at the time, with neatly-styled alloy wheels and the return of the iconic red grille stripe from the Mk1 and Mk2.

The Mk6 Golf GTI was an evolutionary model, just as the Mk4 had been to the Mk3. Power crept to 207bhp and in evo’s hands, the 0-60mph time dropped by three tenths to its predecessor.

It was becoming outgunned by rivals however, and just as the Mk5 had again received a more powerful model in the shape of the second-generation R32, so VW offered the first Golf R with the Mk6. With 266bhp and all-wheel drive, the R had – as described in The Knowledge in the back of the magazine – ‘tremendous pace and poise’, more than making up for the GTI’s less extreme performance. 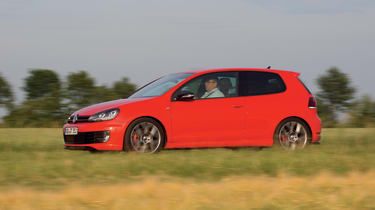 And so to the Golf GTI Mk7. The current car makes 217bhp as standard, though that’s now risen to 227bhp with the new 2017 car (or 241bhp, for those selecting the Performance pack). It has sharper styling than any generation since the Mk2, and packs more tech, but weighs less than either the Mk5 or Mk6.

Once again, it’s not the fastest hatch on the block, but the recent introduction of Clubsport and Clubsport S models has turned that around somewhat – and the latter is currently evo’s favourite hot hatch, seeing off the Ford Focus RS and SEAT Leon Cupra 290 in issue 227.

The Golf GTI has always been on an evolutionary, rather than revolutionary path – apart from that very first Golf GTI. But if the revised Mk7 and the Clubsport models are anything to go by, there should be much to look forward to when the Mk8 Golf GTI eventually arrives.