A 750bhp GT3 RS - that should bait the purists. So is the 9ff GTurbo any good? We find out 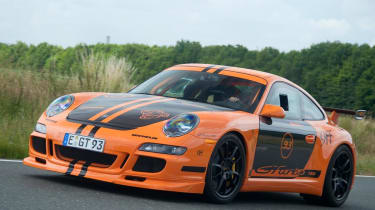 The 9ff GTurbo 750 Lightweight, a twin turbo Porsche GT3 RS with 750PS and 626lb ft of torque that results in the kind of high end acceleration to worry just about any hypercar on the planet.

Taking the spanners to the ultimate driver’s car in the Porsche line-up was a brave step indeed, but the end result is a monster. Be warned, the rapier like point of the RS is gone, the car is now a sledgehammer and the forced induction will give purists a heart attack. But then that’s kind of the point.

The weight saving is the big one for us. Porsche waxed lyrical about stripping 20kg from the base GT3 for the now base RS, but Fatthauer has gone way further – stripping a further 100kg to create a 1200kg flyweight with the help of plastic side windows, carbon-fibre bonnet and finger light doors. 9ff has even developed a carbon-fibre roof if you want to take it to the nth degree. Then there’s the interior, or, more to the point, there isn’t. Cobra Evolution race seats, a front rollcage from Porsche Motorsport and what remains of the dash are the only creature comforts. Even the gear linkage cover is gone.

The engine is also worth touching on. The 3.6-litre gets twin F750 KKK turbos, titanium pistons, rods, crank, three fuel pumps to feed the car and a new system for cooling the oil, together with 100-cell catalytic converters, new manifolds and more or less everything else. Just the block remains stock. And if you’re worried about the bore increase for the 3.8-litre, don’t, they’re working on it.

Fatthauer himself takes me out for a demo run before handing over the wheel and even he is cautious in first and second gear. The single-mass flywheel and total lack of sound insulation makes the GTurbo like being in a gravel-filled tumble drier, then there’s the whistle of the turbos and the deep-throated sneeze of the wastegates on each change up the box.

Traction, rather than power, defines the 3.2sec dash to 60mph and the GTurbo struggles to get the power down until the dark side of 100mph, even though it will nail 125mph in 9.1s. An upgraded traction control system from the latest Porsche 911 GT2 helps, but it still takes a delicate right foot to keep this car on the road.

Cornering is another ballgame altogether. The RS is famous for its precision, but the spiky power delivery and borderline race rubber means the finesse is gone. You walk the line between spectacular speed and a spectacular accident.

The end result of 9ff’s work is a 225mph 911 that will skin most cars on the public road that costs just over 200,000 euros all-in. There aren’t many stock cars this fast, this impractical and this spiky at the limit, so comparisons are thin on the ground. The same money can get a similarly powered Ferrari 430 from Novitec, or you could just buy an RS, the carbon parts and a practical car with the change.

You don’t have to have the full conversion. In fact you could just have the weight-saving parts – which could go a long way to making this the sweetest handling RS of all.