It costs £28,500 more than a stock GT-R but has no more power. So what's special about the Nismo? 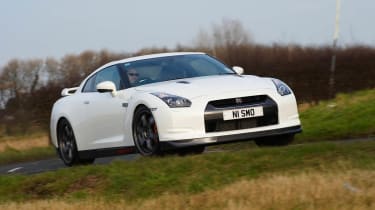 For the price of a brand new Nissan GT-R and a 370Z you could have this, the Nismo Club Sport GT-R. Quite subtle, isn’t it? The changes to the driving experience are subtle, too, but while the naked maths don’t look good, the Nismo GT-R is an undeniably well-judged package of upgrades. You’d expect nothing less of Nismo (Nissan Motorsports International Co Ltd) given that it has worked side by side with Nissan’s GT-R engineers, jointly developing a number of components – wheels, exhaust, seats – for Nissan’s ultra-expensive GT-R Spec V.

Elsewhere in the world the Nismo upgrades are available in three packages but here in the UK, Middlehurst Motorsport, the Nismo-trained and approved dealer, is selling only the total conversion, complete with Nismo numbered chassis plate. For your £28,500 you get those Spec V alloys finished in grey (they save 1kg a corner), bespoke road springs and three-setting Bilstein dampers, a pair of carbon-shell Recaro seats that save 12kg and a titanium exhaust worth another 5kg. The price includes fitting, setting-up and VAT.

Visually, the Nismo is distinguished mainly by its wheels, which, to my eye, are different rather than better. Love the tailpipes, though, which have a vaguely aerodynamic, aerospace look. It’s almost a disappointment that the noise that comes out of them is the stock V6 growl. As soon as you get behind the wheel you appreciate that the new, manually adjusted Recaros are perfectly sculpted, and while they come into their own in high-G cornering and make the standard items feel a bit armchair-like, they’re everyday comfortable too.

The suspension pulls a similar trick. It’s a set-up that has been configured to shine on track but, unlike the Spec V’s non-adjustable set-up, it retains three settings and copes with the mundane very effectively. Initially the Nismo feels just as stiff as the regular GT-R, moving with the bumps you find in ruckled urban roads rather than smoothing them over, but pick up the pace just a little and there’s less agitation. The springs are a bit stiffer all round but by less than 20 per cent, reckons Andy Middlehurst, accomplished racer, Skyline and GT-R expert and boss of Middlehurst Nissan. What makes the difference, he says, is that the Nismo Bilsteins have both bump and rebound control, rather than just the bump of the standard dampers, and this gives more positive wheel control. He also says the rear dampers have longer travel, helping keep the rear wheels in better contact under heavy braking.

What you feel is a cleaner, more positive GT-R. Even with the dampers set to ‘comfort’ there’s none of the standard GT-R’s fore/aft pitch that lets you know you’re on the softest setting. The upshot is that the GT-R feels neater, better poised, even more invincible than normal, traversing difficult asphalt at speed decisively and allowing the driver to get on the throttle sooner. ‘Comfort’ ought to be the default start-up setting on the Nismo, the firmer settings reserved for especially smooth surfaces and, ultimately, the track.

It’s not the only reason the Nismo impresses, though. This car is also running revised engine and gearbox maps, which Middlehurst hopes to offer on the UK editions at £1200. The engine module doesn’t offer any more power but pumps up the twin-turbo V6’s delivery lower down and sustains its urge longer, while the gearbox module is said to quicken the shifts and hold onto gears longer, presumably to match the engine’s revised delivery.

The twin-clutch ’box is much cleaner in its low-speed operation, and smoother, more alert and more comfortable for it. The hit from the engine seems no bigger but it’s delivered sooner and this, allied to the revised chassis’ keenness, gives the potential for even more devastating progress. Trickling back through St Helens to the Middlehurst dealership, I conclude that the response and refinement of both the engine and transmission feel like second-generation versions. In other words, what the stock GT-R should feel like when it gets a mid-life refresh.

At £90K, the Nismo GT-R is bound to be rare, but then so are its abilities.