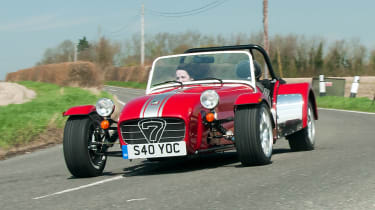 The Caterham Seven '40 YOC' special edition has sold out in less than a month. The free-of-charge pack, applied to the first 40 Sevens sold after its introduction, celebrates 40 years of the Caterham Seven.

Caterham Cars started building the Seven in 1973, when then owner Graham Nearn acquired the Lotus Seven building rights from Colin Chapman. While the Seven has moved on somewhat since then, it’s still a very similar car to that Lotus at its core.

The limited edition Sevens gain a grey painted chassis – mimicking the original Lotus colour – with ruby red paint on top and bonnet stripes which mark the Seven’s birthday. There's a set of new 15in silver alloys wrapped in Avon ZV3 tyres. Inside, the dashboard receives grey leather and a numbered plaque, while the leather seats get grey piping. There's also a snazzy new ignition key.