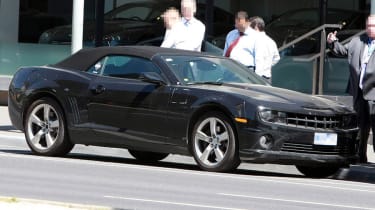 The Chevrolet Camaro is a car we've already driven in drop-top form. It now appears that the concept is quickly becoming a reality, though. Just days after the production-spec Camaro coupe picked up plenty of plaudits and fans at the Detroit motor show as a Black edition, this all-black convertible has been driving the Australian streets for some fine-tuning.

Financial difficulties at parent company General Motors mean the sight of exciting new metal close to showroom specification can only be a good thing. Chevrolet has been bragging that over 10,000 orders have been placed already on the Camaro range, with hard-top deliveries set to begin in February. Limited official UK sales are widely expected to kick-off in 2010, although GM's troubles in the coming year are likely to affect whether that happens or not.

The convertible doesn't differ wildly form the coupe, save for the roof. Expect it to use the same 300bhp V6 and 400bhp+ V8 as the coupe. Interestingly, most of those 10k orders have been for the V6 version. Pretty telling of the market muscle cars currently operate in...