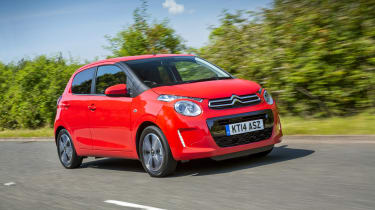 The C1's closest adversaries are its sister cars, the Peugeot 108 and Toyota Aygo - they were all developed at the same time using mostly the same components and they are all made in the same factory.

There really isn't much to choose between them on pricing either. The C1 line-up starts at £8,345 on-the-road for the basic three-door 'Touch' model powered by the 1.0-litre engine. While it does come with the requisite safety kit as standard, plus LED daytime running lights, it's otherwise quite sparsely equipped. The C1 Feel is better, though the C1 Flair is the most substantial thanks to detail enhancements.

Airscape is the name given to the electric roof and it costs £1,000 extra - available on the Feel and Flair variants or the generously appointed Airscape Feel Edition, which is £11,345. The recommended 1.2-litre engine is available from £10,635 though isn't offered with all trim levels.