204bhp, 146mph, and a surprisingly high price. Citroen has released full details of the DS3 Racing. 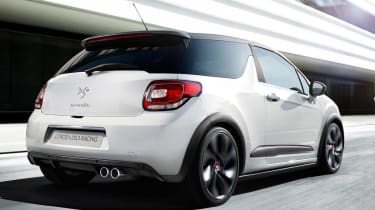 Citroen has released production details of its DS3 Racing – and it looks pretty good on paper. We’ve already driven a development model and the good news is that version you’ll be able to order from the 1st September is even more powerful.

The turbocharged 1.6 now pushes out 204bhp and 203lb ft, outputs within a whisker of the MINI Cooper S JCW that shares the same basic engine (read about our long termer). The claimed 0-60mph is 6.5secs with a top speed just 4mph short of 150mph.

That makes it a genuinely rapid little hot hatch – and don’t forget the whole thing has been developed by Citroen Racing, the in-house outfit that runs the WRC team. The aim according to the literature has been to ‘accentuate feedback from the road’, which we like the sound of.

So front and rear tracks have been widened by 30mm, the suspension has been dropped 15mm, there are specific dampers and suspension settings, plus new brakes with four piston callipers.

However, Citroen aims to further justify the asking price (which we’ll get to in a minute) by insisting the DS3 Racing won’t compromise on comfort or technology. Digital air con, Bluetooth, USB and an eight-speaker stereo are all included.

Deliveries won’t start until the new year, which is why Citroen has announced the price inclusive of the new 20 per cent VAT rate, but still £23,100 is a lot of money. Even if only 200 right-hand drive cars will be coming to the UK.

evo's Dobie blogs on the DS3 Racing's price. Too much? See more pics and read the original news story

Read our drive of the development car