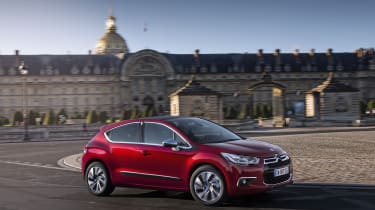 You’re looking at the latest iteration of Citroen’s DS4, an upscale alternative to the C4 family hatchback. Citroen is keen to highlight the luxury features of its DS range right now, with the brand now a separate entity from Citroen. Technically, this isn't a Citroen DS4, but 'DS4' alone.

The DS4 has always been a bit of a black sheep in the French brand’s luxury arm however, with neither the sales success of the smaller DS3 nor the flagship positioning of the DS5. Can new engines and other subtle revisions help it stand out?

Citroen has installed its 1.2-litre turbocharged Puretech engine in the DS4. In this application it produces 129bhp, 9 per cent more than the naturally-aspirated 1.6 it replaces, and 170lb ft of torque. The latter figure represents a 44 per cent improvement and is produced at 1750rpm, 2500rpm lower than before.

With a standard six-speed manual gearbox and stop-start it’s also 19% less profligate with unleaded than before, at 56.5mpg combined and 116g/km of CO2.

While it won’t alter the driving experience, the dashboard is also worthy of closer examination. Swathed in Nappa leather, Citroen claims it requires 15 hours of handcrafting to wrap and stitch. If nothing else, it’s a sign Citroen’s luxury aspirations are more than just pretence.

First impressions are positive, with plenty of adjustment in the steering wheel and seat to adopt the driving position of your choice.

It’s a genuinely nice environment in which to sit too – the leather-trimmed dashboard, steering wheel and gearknob could genuinely pass as items from cars much further up the status ladder than Citroen has climbed before and Citroen’s watch strap-style leather seats both look and feel fantastic.

The Puretech engine is a cracker too. While the three-pot’s vibrations do make themselves felt through the pedals, they’re well-isolated from everything else, and while it’s hardly lightning fast (62mph arrives in 9.9sec) it never feels short of urge in normal driving and the six-speed manual is light and slick through the gate, always ready to make use of the useful low-down torque.

Push harder and the chassis will disappoint before the engine does. It does a reasonable job of isolating you from the road surface, which is good, but also isolates you from the action. The ride can turn pattery at low speeds too, though it’s comfortable and refined out of town.

What the DS4 won’t do is raise the pulse. There's little steering feel and slightly delayed responses around the straight ahead. It's more pleasant to waft around in than it is to tackle corners. Citroen might argue that the DS4 therefore meets its brief – this is a luxury car, rather than a hot hatchback – but evo readers would probably want a little more involvement.

As DS3 is to Mini, so DS4 is to Mini Countryman. A Countryman of equivalent performance is the regular Cooper Countryman, at £18,510. It’ll hit 62mph in 10.5 seconds, but its older-tech engine is less frugal than the downsized Citroen.

Perhaps a more apposite rival is Citroen’s own C4 Cactus. Its own 1.2 Puretech develops less power (108bhp) but featherweight build results in a 9.3sec dash to 62mph and 60mpg economy. It also rides better than its luxurious counterpart and lack of inertia means it feels happier when thrown around. A top-end Flair model begins at £17,190, which is the starting point for DS4s.

Official pricing hasn’t yet been revealed – we’ll update this article when it is – but a basic DSign DS4 with the old 1.6 naturally-aspirated engine started at £17,855 before Citroen’s updates. We’d expect the revised model to command similar money.