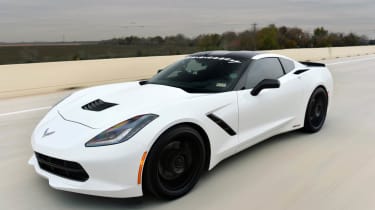 A Hennessey tuned Corvette Stingray – with up to 1000bhp – is now on sale. The American tuner – which also produces the 275mph Venom GT supercar we’ve reviewed on video – has been modifying American performance cars for over two decades, and has applied its expertise to the new, C7-generation Corvette before it’s launched. Hennessey Performance has confirmed four different tunes of Stingray, each taking the standard Corvette’s 6.2-litre V8 engine well beyond its showroom-spec 450bhp. The HPE600 produces 600bhp (at 6300rpm) thanks the fitment of a TVS2300 supercharger and HPE air induction system, while the HPE700 produces an extra 100bhp (at the same rpm) thanks to CNC ported cylinder heads. The next step up – courtesy of a pair of ball-bearing turbochargers – is the HPE800 with, unsurprisingly, 800bhp, also produced at 6300rpm. Among this kit’s upgrades are stainless steel crafting for the turbo manifolds and cat-back exhaust. The headline act, though, is the 1000bhp twin-turbo HPE1000. Again, maximum power is produced at 6300rpm. Chevrolet hasn't yet confirmed performance figures for the new Stingray, but with estimates of a 4sec 0-62mph sprint and 190mph top speed, we'd expect a 1000bhp version to hit 60mph within 3sec on its way to comfortably topping 200mph.

This package – which Hennessey has already received orders for – costs 69,500 US dollars, making it likely to more than double the cost of a Corvette C7. With a combined total of around 120,000 dollars likely, though, that still means a 1000bhp sports car for the equivalent of £80,000 – less than a 394bhp Porsche 911 Carrera S. All of Hennessey’s Corvette Stingray upgrade packs also come with a sprinkling of visual extras, including serial-numbered plaques, carbonfibre sills and Hennessey floor mats, plus a one-year, 12,000-mile warranty. Among the options available – perhaps advisably – above the HPE power boosts are wheel, tyre, suspension, brake and transmission upgrades. ‘I expect that our first vehicle will be completed within six to nine months of receiving our first C7’, John Hennessey told us, hinting at the first 1000bhp Corvette’s rolling out late 2013/early 2014.

A video of the HPE600 car has been released, where it (with the help of 100bhp extra via a nitrous oxide kit) hits 200mph on a Texan road. While there’s a police interceptor with lights flashing, this was all perfectly legal, the tuned Vette promoting both the new Highway 99 ‘Grand Parkway’ while also testing the toll booth’s speed detector – and scaring local residents with the fact it works…

There is no official performance figures to accompany the run, though keeping an eye on the video’s timer suggests a 0-60 time of around 3.5sec and a 0-100mph time of around 8sec, while the NOS is used from 150mph. The run itself looks simple, the driver providing an interview through the window at the end and using the words ‘easy breezy’.