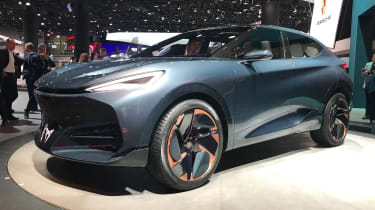 It’s a scant 18 months since SEAT announced that Cupra was to be ‘a new sports car brand with its own identity’ and yet here we have the third SUV to be given Cupra branding – the all-electric Tavascan Concept. There’s no doubt it’s a rather arresting design, but is it desperately… sporting? While the sports car market is shrinking, demand for SUVs is exponentially rising, and Cupra reckons the all-electric coupe SUV sector is growing at 15 per cent a year and it is keen to get on board.

The Tavascan (named after a village in the Pyrenees) is based on the VW Group’s MEB electric platform, and as it’s destined to be the brand’s halo model it features the most powerful combination of batteries and electric motors possible. There are two electric motors – one for each axle – with a combined output of 225kW (302bhp) which endows the Tavascan with a sub-6.5sec 0-62mph time. The 77kWh battery pack gives a WLTP range of around 280 miles. With the batteries mounted low down in the vehicle’s structure, Cupra says its latest SUV offers ‘a truly dynamic drive’.

While we’d perhaps rather be seeing a Cupra hot hatch rather than an SUV, there’s no getting away from the Tavascan’s striking exterior which its manufacturer says ‘marries the presence of an SUV with the sleekness of a sporty coupe’. The chiselled design features a front end with two large S-shaped ducts that channel cooling air to the battery pack and enhance its aerodynamics and is finished off with an illuminated version of the Cupra’s somewhat divisive badge. 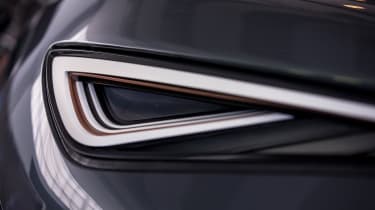 Cupra says airflow around the Tavascan is a crucial part of its design and the 22-inch turbine alloys have been designed to minimise resistance to the airflow past them. At the rear the diffuser provides aerodynamic functionality, while a full-width LED rear brake light spans the width of the vehicle, broken up by another illuminated Cupra logo.

While the exterior looks like it could be not far off a potential production car, the interior is currently still very much at the concept stage with four heavily sculpted seats. Instrumentation is taken care of by a pair of screens – one in front of the driver, the second being of the horizontal iPad-style device seemingly so popular with manufacturers these days.

Cupra won’t be drawn on whether the Tavascan will form the basis for its next stand-alone offering, but there’s no doubt that parent company VW will be keen to exploit the new MEB electric platform as much as possible, which could well lead to Cupra offering yet more ‘performance’ SUVs in the future. 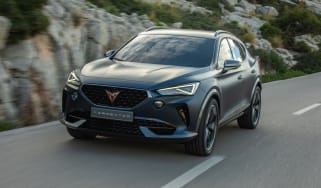