World’s most powerful saloon, the Dodge SRT Charger Hellcat, to get updates derived from the Dodge Demon. 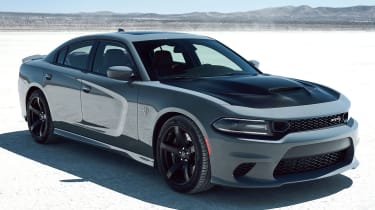 The world’s most powerful saloon title doesn’t belong to an AMG or Audi RS model. Nor is it a rare top-spec Bentley or Porsche. It’s the Dodge SRT Charger Hellcat, a 697bhp saloon with origins from a 1990s Mercedes E-class, featuring a whopping great big supercharged 6.2-litre Hemi V8 under the bonnet. To counter all the near-700bhp Teslas being churned out of California, Detroit has responded with details of an updated Charger Hellcat, borrowing some performance goodies from the Dodge Challenger Demon.

So what’s new? The mechanical changes have been focussed on cooling, and an attempt to prolong the life of particularly vulnerable components. One such new feature is an after-run chiller, which keeps the charge air cooler running for a period of time after the engine has been switched off, similar to a turbo timer in old high-performance turbocharged Japanese cars. Launch assist has also been integrated into the existing launch mode, now using the wheel-speed sensors to detect rear axle tramp and adjusting the torque output to stop it before it begins.

Line lock has also been integrated, locking the front brakes to allow the car to spin up the rear wheels, not that it’s very difficult to get the rear wheels spinning in a saloon car with nearly 700bhp. The Dodge Charger, in its current ‘LD’ form, has been on sale since 2006, and alongside its Chrysler 300C cousin, was loosely based on the W210 Mercedes-Benz E-class, which first appeared all the way back in 1996.

Despite these archaic bones, and Chrysler/Dodge’s increasingly vulnerable place in the contemporary car market, the Charger’s combination of tough retro styling and massive performance has kept this model as one of Dodge’s most popular models. The Hellcat, first introduced in 2015, took this to another level, taking power up to 697bhp with 650lb ft of torque. Attached to an eight-speed automatic gearbox, the Hellcat’s incredible power output has kept it way ahead of more familiar powerhouses from Germany.

The 2019 Hellcat’s tough aesthetic has remained much the same, save for a new grille and 20-inch forged wheels. A satin black bonnet is available on the options list, and the interior has also picked up minor Alcantara trim updates and interior badging.

Unfortunately, FCA will not be bringing any Hellcats to the UK, but there have been continued rumours of the Jeep Grand Cherokee Trackhawk, which features the same powertrain, eventually being available here in the UK.