As 2014 draws to a close, we look back at some of our favourite covers and spreads with this gallery 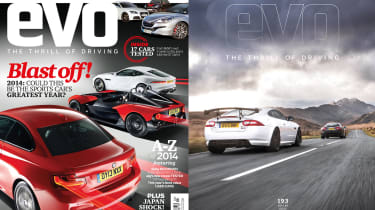 It really has been one hell of a year at evo Magazine, not least because we passed the magical milestone of 200 issues (hurrah!). We've also had a fantastic time sharing the fast paced world of performance motoring with you, in what has been one of the most exciting motoring years in history.

Undoubtably, one reason 2014 will be unforgettable is because it is the year that we welcomed the arrival of three groundbreaking hypercars, the LaFerrari, McLaren P1 and Porsche 918. And who could forget the world's first megacar, the Koenigsegg One:1, capable of reaching 273mph?

We also pitted the ultimate evo cars from recent history against each other to crown our favourite, in one of the most logistically challenging but ultimately satisfying features ever to land on evo pages. And we have to mention those fantastic drives across some of the most gorgeous stretches of tarmac the planet has to offer in some of the world's most exotic supercars.

Throughout this year, we've had our eyes opened to a future of technologically advanced but no less exciting motoring. 2013 might have been the year of the selfie, but 2014 has been the year of the performance hybrid, perhaps the most important being the pioneering BMW i8.

To celebrate this fantastic year and thank you for joining us on the way, we thought we'd compile this gallery of some of our favourite covers and spreads. Don't forget to click 'Read More' in the captions.

Have we missed your favourite issue off the list? Let us know in the comments below.