The future of racing games? Virtual reality and motion rigs

Put on a VR headset and sit in a motion racing rig, and you'll never look at racing games the same way again 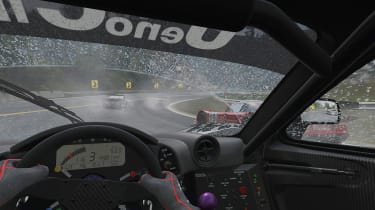 I’ve been playing racing videogames for about quarter of a century now. Possibly a little longer.

The first racer I ever played was Grand Prix Circuit by Accolade, which debuted on DOS in 1988. For the time, it was cutting-edge - three real F1 cars (from McLaren, Williams and Ferrari), eight real-world circuits based on the F1 seasons of the time, and a first-person driving position which saw you looking out from your cockpit to the vibrant pixellated circuit ahead.

> Click here to go to our videogames hub page

It was, predictably, fairly crude. The circuits had no elevation, and beyond the occasional tunnel there was no sense of being at the track you’d selected - Monaco was just as open and green as Monza. Or Suzuka. Or Silverstone.

Over the years, I played through dozens of other racing titles from Nigel Mansell’s World Championship Racing to Network Q RAC Rally. With the PlayStation era came a flurry of new games, each with increasing levels of realism - Ridge Racer, F1 ‘97, TOCA 2, the Gran Turismo series, Grand Prix Legends. In recent years, games like Assetto Corsa, Gran Turismo 6, and Dirt Rally have occupied my time. Immersion has increased, car handling improved, and environments become ever more detailed. 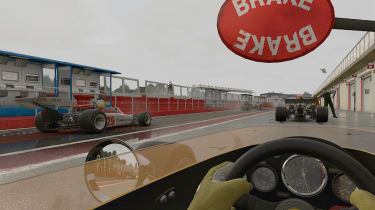 But it has worried me that as the games have improved, I’ve gradually lost interest. As an adult of course I don’t have the time I used to put into completing racing games, but I can’t shake the feeling that the strive for realism is becoming increasingly hollow. No game can really replicate the feeling of driving an actual car, and while graphics and force feedback wheels have tried to keep pace, you can only create so much immersion sitting in front of the computer screen.

That is, until VR came along.

VR - that’s Virtual Reality - is becoming big business in the gaming industry. You’ll no doubt have seen images of people playing VR games, as the headsets look not unlike what people in the 1960s imagined everyone would be walking around with in the future.

> Project Cars Game of the Year Edition review - as close as it gets to the real thing?

(People in the 1960s did not forsee that we'd actually all be walking around staring at palm-sized screens, insulting people on the other side of the world via social media, and sharing pictures of cats).

And I’m convinced that VR has now become the gold standard for racing gaming. Nothing less than a VR headset is now required to enjoy the latest racing titles to their full, and ideally you should pair it with a proper racing rig.

I recently had the opportunity to enjoy such a setup when VRX Simulators set up a full RAID Pro 340 Racing Simulator in the evo office. It’s a complicated system, comprising not just a VR headset (an HTC Vive, to be specific - one of the market leaders in VR) but also a Scan 3XS PC, which controls the actions of a Raid Pro340 motion simulator rig - an Ariel Atom-style structure equipped with a Sparco Evo II seat, a Sparco steering wheel attached to a Reimer Motorsports direct drive force feedback system, Fanatec SQ gearbox unit, and HPP racing pedals. 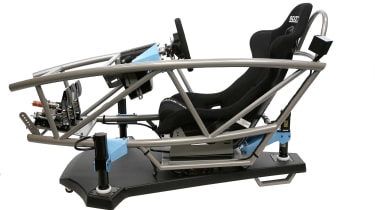 You could buy a VW Golf R for the cost of the full outfit and still have some change (on Scan's website, the whole setup, sans PC, costs £35,999), but running Project Cars it delivered the most immersive, most convincing racing game experience I’ve had in over quarter of a century of whiling away the hours on videogames.

It’s hard to know where to start. I can't overstate the importance of the Raid Pro340 motion simulator, not least because it’s the first such setup I’ve used that hasn’t left me feeling a little queasy afterwards. That’s probably because its range of movements is only slight, (the electronic rams each have a range of motion of up to three inches), but that range is enough to give you the basic sensation of movement lacking in a normal gaming seat. It’s even better at representing the rumble of kerbs or bumps and dips in the road, particularly when combined with convincing feedback from the steering wheel.

The VR headset also plays a major part, and it should now be considered the bare minimum for getting the most from racing games. Graphical fidelity isn’t quite there yet - put simply, it’s easy to see the pixels - but the sensation of sitting within a three-dimensional object, being able to look around it, shift in your seat and look through corners is utterly incredible.

With a set of headphones to cut external noise and filter 3D sound into your ears, you quickly forget you’re not driving a real car. Not convinced? On a couple of occasions when I lost control of my virtual steed, I genuinely braced myself before having my equally virtual crash and feeling just a small jiggle from the RAID rig. You quickly forget the arms flailing about in front of you are not your own. Trust me, it’s terrifyingly convincing.

Don't be put off by the official footage above, incidentally (taken with another popular VR setup, Oculus Rift). Your actual field of view is much more realistic, and your head movements only as exaggerated as you actually feel the need for. I found myself tilting my head and looking through corners for the apex, but otherwise it's as natural as looking where you're going in an actual car.

What you do get, not visible in the video or the screenshots, is more vibrant lighting. Sometimes to excess - pick the wrong circuit on a sunny day and there's so much glare you can barely see. But again, it all adds to the sense of existing in a physical space, rather than simply staring at a screen. 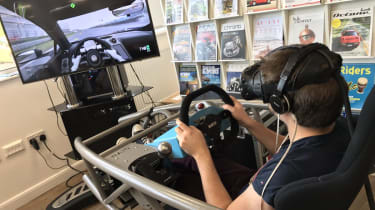 You need a mega PC and graphics card to run all this, of course - the recommended Scan 3XS PC packed a quad-core processor, 8GB of RAM, and an 8GB dedicated graphics card - which can add another couple of grand to your shopping bill.

But if you’re reading this and you have the means for the full, RAID full motion racing simulator, then you’ll never look at racing videogames the same way again - and as VR technology and motion rigs improve, the genre may change more in the next quarter century than it has in the last.