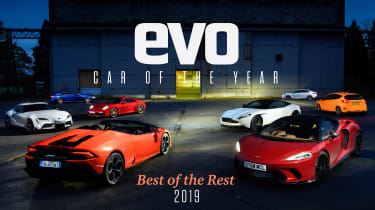 Two names that resonate more with car enthusiasts would be hard to find. 911: the de facto sports car, heritage stretching back to 1964, innumerable race wins, some of the best driver’s cars of all time. Supra: darling of a newer generation of enthusiasts, iconic on the silver screen, Castrol, drifting, staggering horsepower.

As it turns out, neither is eCoty material in their latest iterations. For the Supra, that’s perhaps not too surprising – for all the bluster and hammering of keyboards, older Supras were, in standard form, never all that. The Porsche is probably more surprising, at least if you subscribe to ‘brown envelope with Stuttgart postmark’ conspiracy theories.

The Supra is promising on paper, and a solid eight-out-of-ten car on tarmac. If that sounds like damning with faint praise, it isn’t meant to. Objectively, it’s probably the best Supra yet, and as proper sports cars increasingly make way for sporty SUVs, that it exists at all is worthy of celebration.

Endless words have been written about why Toyota partnered with BMW for the Supra project, and whether you like the idea of it or not, the reality is that there’s a lot of sense in using BMW architecture if you want to make a straight-six sports car. The question should be, perhaps, were the Supra’s parts taken from the right BMW straight-six sports car? Driven back to back with the M2 Competition, the conclusion has to be ‘no’. The Comp proved more exciting and more involving when we took both to Yorkshire (evo 265), and being £3k cheaper looks conspicuously good value when you consider its more exotic powertrain. 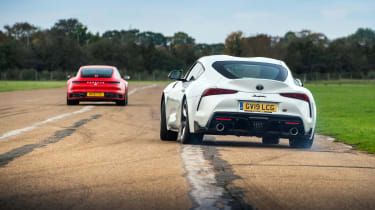 The Supra gets many things very right, though. The voluptuous styling grows on you, and is individualistic enough to cut its own dash in the £50k sports car segment. It’s tantalisingly compact (shorter than a GT86) and, despite an abundance of BMW componentry, feels special once you’re inside, ensconced in low-set seats and looking through a letterbox windscreen over that thrusting bonnet. It puts its 335bhp to good use too, losing little in a straight line to the Carrera S. It comfortably kept the 404bhp M2 Comp in its sights up in the Dales, too.

Where it falls down is in those crucial aspects of interaction we crave from cars such as this. While the eight-speed ZF auto is undoubtedly a well-engineered device, it’s a dispassionately efficient way of changing gears. In the Supra, it also lacks rev-matching on downshifts, so it’s not just uninvolving to change gear, but actively disruptive. There’s a shortage of steering feel too, where the Supra’s key rivals – Cayman, Alpine, M2 – all have a more feelsome helm to varying degrees. There’s little faulting its precision or response, but in this class perhaps more than any other, a car lives and dies by its oneness with the driver. The GR Supra undoubtedly leaves room for a more focused GRMN variant, but as it stands, senses go untingled.

You could level similar accusations at the 911. It too is auto only for now, though Porsche’s eight-speed PDK is perhaps the best auto on the market. It too feels slightly muted at the fingertips, though this improves with speed. And like the Supra, the 911 feels almost too grown-up, forcing you to push harder to unearth the qualities we love about 911s and, by definition, sports cars in general.

On track, as John Barker found out on the car’s launch (evo 258), it’s both enormously accomplished and indisputably a 911. The steering is responsive and talkative, the engine and brakes keen, the chassis grippy and exploitable. It’s a better car than early 991s were, certainly – Porsche has learnt much about electrically assisted steering since then. On the road, though, travelling a little slower and therefore well beneath the car’s capabilities, it’s less involving than the car it replaces. It may not have grown too much, but it feels a larger, more mature car than later 991s, almost a shrunken Panamera rather than a 911.

A manual transmission will hopefully go some way to rectifying things, by bringing back a crucial layer or two of driver interaction, and by sidestepping the PDK’s natural tendency to shuffle to eighth gear and stay there. But in the meantime, Porsche’s best driver’s car remains the Cayman, warts and all.