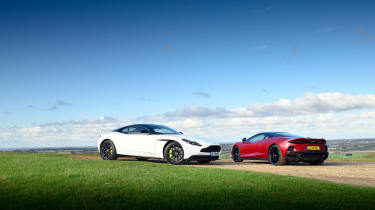 Its new GT is less focused than its Sports and Super Series relatives, but in some ways even more appealing. Here is a supercar that trades some of their precision for even better on-road manners and long-distance comfort, traditionally an area in which McLarens have already excelled. Yet it’s by no means short of ability, sharing much of its underpinnings with the 720S, even if McLaren says this newer model sits in its own sector – the GT is a GT, rather than a Super Series supercar. 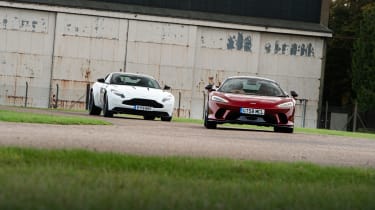 So what makes the £175k DB11 AMR worthy of consideration? Think of it as going in the opposite direction to the £163k McLaren GT. The original DB11 was already a relaxed long-distance tourer, but one with plenty of room for improvement as a driver’s car. The AMR (that’s Aston Martin Racing) finely hones the DB11’s qualities, with subtle and not-so-subtle tweaks to ensure it’s as competent on a great road as it is on the motorway.

So one is a supercar GT, the other now a GT supercar. First blood goes to the McLaren – driving it in evo 267, Jethro Bovingdon saw fit to grant it 4.5 stars out of five, while Adam Towler awarded the AMR four stars in evo 260. Each feels much as you’d expect given their contrasting briefs. A softer McLaren is still more focused than most cars – its 612bhp is enough for a McLaren F1-matching 0-62mph time – while the 630bhp AMR feels every bit the continent-crushing GT car, but one whose rounded edges have been milled to a finer point.

The DB11’s transformation is probably the most impressive, given how little the original car resonated with us. It feels not dissimilar to the improvements we witnessed to the V8 Vantage, between driving an unpleasant pre-production example and the genuinely fun and involving car that took scored highly in our 911 rivals test in evo 261. The DB11 AMR isn’t just more fun than the regular DB11, but also more predictable, more controlled, and communicates better. ‘Don’t think of the AMR as a go-faster niche model,’ wrote Adam in evo 260. ‘Think of it as the car the DB11 should have been all along.’

It is, to these eyes, also more attractive than the McLaren GT. The GT is least successful from the front – more than once during our shoot we have to double-check the nose lift is lowered, because there’s something about the tall front air dam and squinty headlights that gives the GT a permanent nose-up stance. It’s a little slab-sided, too – the outgoing 570GT looked more dynamic. This bulk exists for a reason, though. McLaren says there’s 570 litres of luggage space split between the front compartment and rear deck (the 570GT had 370 litres), and the cabin is as airy as that of the 720S. Better still, it’s resolutely visual mass only – at 1530kg, the GT is barely heavier than a 911.

Most importantly of all, though, it still feels like a proper McLaren on the road. The steering is light but communicative, the turbocharged engine smooth and effortless, and the ride quality probably the best of any McLaren, despite the bar being set so high already. And because it’s still inherently a supercar, it still feels as special as one.

The GT remit ultimately limits its precision and feedback, and this would in turn have denied it the same success in eCoty as previous McLarens. But if you take away one thing, it’s that between the McLaren GT, DB11 AMR and Bentley’s Continental GT, no country in the world makes a better grand tourer than Great Britain.