Aftermarket brake upgrades have long been a popular investment for performance car owners. But things are about to get rather complicated. 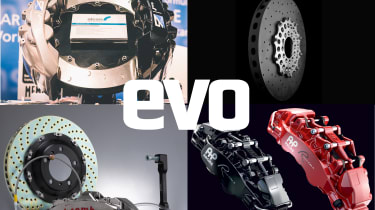 Stopping. It’s as important as going. Maybe more so. (You can only brag about hitting 150mph if you didn’t subsequently hit an immovable object at a barely diminished speed.)

Traditionally, the aftermarket has been able to offer improved slowing power because the engineers of mass-produced cars have to fit brakes that fall within a budget set by their company’s accountants. But improved safety legislation and higher customer expectations have raised the OEM game. The more switched-on marketing departments are even promoting their own trackdays for owners, so a very high standard of braking in extreme conditions has become more desirable and therefore fiscally acceptable.

Another factor shaping the aftermarket is that, for many years now, the big players have been inextricably linked with the car makers themselves. Brembo, AP Racing, Alcon and others are the go-to guys when a manufacturer wants to prove how serious it is about the stopping equipment on its new model. As a consequence, the aftermarket is having to adhere to mainstream rules and regulations. Some of these, such as those for particulate emissions containing copper from brake pads, are industry-wide anyway, but an association with a major car maker is an encouragement to meet new standards sooner rather than later.

For the medium- to long-term future, the biggest challenge facing the braking aftermarket is the proliferation of electro-mechanical automatic emergency braking systems, or AEBs. This is a technical extension of many of the systems we now take for granted: ABS, traction control, stability control, electronic brake-force distribution and, in the era of hybrid and fully electric cars, brake-by-wire and regenerative- braking systems. AEB setups are on the brink of becoming part of a holistic car-control package – a single controlling computer that integrates all of the on-board electronics – that will assess data from throttle position, road speed, steering angle, slip angle, forward-facing radar sensors and even GPS, and trigger an optimum braking response that is beyond the majority of drivers. Several national governments are pushing for AEB systems to be mandatory.

Further down the line, braking will also be governed by information from roadside sensors and even other cars – a broken-down vehicle around a blind bend, for instance, could communicate with your car, which then cuts the throttle and applies the brakes. Such a complex setup would likely require exact data about brake- disc diameter, brake-pad compounds, caliper spec, etc – information that could be corrupted by upgrading your a discs and pads. Unless, of course, the aftermarket industry is working with the car manufacturers from the outset. Such relationships will be critical in the future.

On a more mundane yet crucial level, through its mainstream connections the aftermarket is embracing the issues vexing the automotive industry in general. Weight saving, for example. Even the smallest reductions impact the power required to move a car down the road, affecting its fuel consumption and CO2 emissions. Aftermarket leaders such as Brembo have refined the design of the internal cooling vents of their high-performance discs, enabling those discs to be smaller in diameter and therefore lighter, all for the same heat-dissipation qualities. Not terribly sexy, perhaps, but it goes down well with legislators.

Composite discs – an iron disc with an aluminium hat (the element that mates with the wheel hub) – also reduce weight. Good for CO2 and also for cutting unsprung mass, potentially to the benefit of ride and handling. And the aluminium hat has superior heat-dissipation qualities, aiding fade-resistance in extreme driving conditions.

At the top end of the aftermarket, Surface Transforms is marketing what it claims is the ‘next generation’ of carbon-ceramic discs. Instead of short strands of chopped carbonfibre, the Liverpool-based firm uses long strands that have superior heat conductivity; they’re combined with a carbon-silicon carbide ceramic. The company calls the resulting material Carbon Fibre Reinforced Ceramic, or CFRC, and reckons its discs run at operating temperatures 100C lower than regular carbon-ceramic discs and offer far greater longevity. The BAC Mono uses CFRC discs and Surface Transforms is a technical partner on the Aston Martin Valkyrie hypercar project.

> History in the braking - how the car brake disc was developed

More affordably, EBC is now promoting Balanced Brake Kits. As the name implies, this is a package of front and rear discs, pads, brake lines and fluid, tailored to your car. The idea is to provide a properly balanced setup that aids your car’s handling. A good aftermarket brakes retailer would advise similar, but EBC has seized the initiative and trademarked the concept, further demonstrating that when it comes to improving stopping power, it’s no longer just a matter of fitting the biggest discs that will fit inside your wheels.