We carry out a thorough test to find the best car headlight bulbs of 2018. 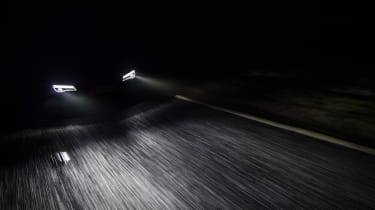 It goes without saying that, behind the wheel, the more you can see, the better. So when you encounter poorly-lit roads and, or, adverse weather conditions, you’re likely to switch on your headlights to improve visibility and illuminate the view ahead. How well your headlights do this will be determined by the quality of their bulbs. So with that in mind we conducted a test to find the best headlight bulbs of 2018.

All the bulbs tested were H4 double-filament specification: halogen headlamp bulbs that produce both low and high beams. We established three main criteria, upon which our assessment was based, to rank the bulbs and find the best product for 2018: the amount of light produced at 50m and 75m, their general level of brightness, and the size and definition of the hotspot cast on a wall at a set distance.

We’ve processed the results to provide a ‘beam score’ as a percentage. See how all the bulbs fared below.

General Electric’s product topped the tables in all areas, making it the clear winner with full marks. It projected light furthest, with the brightest beam. Furthermore, it was streets ahead of rivals in the hotspot test, casting a much larger, well-lit area on the wall than others. 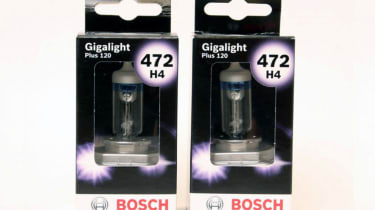 Bosch’s bulb rivalled the Megalight in terms of the area of road it illuminated, although it was noticeably dimmer than the winner and quite a few others on test – this was evident on the hotspot test.

While it settles for third place, the RacingVision bulb is an admirable performer. That said, one of the bulbs was on the legal limit of maximum light output, which was appreciable to the naked eye.

One of the newest bulbs on the market, it arrives with a bold claim of being 150 per cent brighter than standard bulbs. Ring also points out that extra brightness doesn't comprise durability and longevity. It lost out to the Philips above, despite generating a brighter light, due to an inconsistency between the pair of bulbs tested.

As the predecessor to the Xenon150 above it’s no surprise it places below in our rankings. Its biggest problem was the disparity of performance between the pair of bulbs supplied, and its wide, shallow hotspot was adequate, as was its peak brightness. 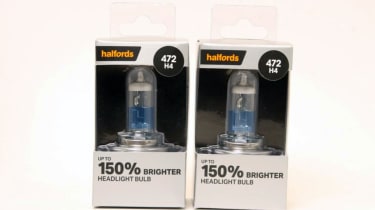 Like the Xenon130, Halfords’ offering was marked down due to the difference of light produced by the pair of bulbs. It was highlighted during the hotspot test and even more pronounced than the Xenon130’s deficiency. Halfords’ bulb did claw back some credibility with its long throw. 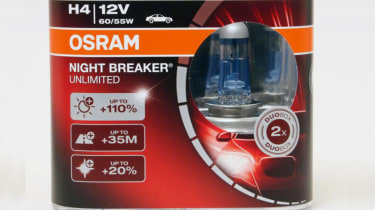 Osram’s Night Breaker suffered similar problems to the above two. The difference between the two bulbs was not just in the intensity of light produced, but how well the glare was controlled by each; on a dipped beam the perimeter of the hotpost was noticeably fuzzier on one side as a result. 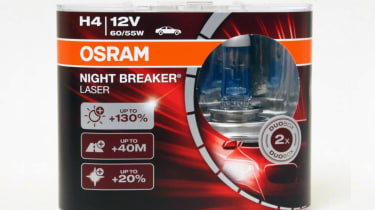 The laser scored consistently across the board, but could only manage eighth overall. It was below par in all metrics and failed to accurately project its light onto a focused area, although it did manage fourth in the peak brightness test. 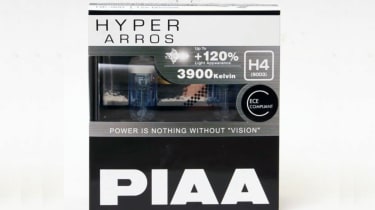 PIAA’s bulbs are finished with a coating designed to provide a whiter, supposedly more stylish, light. The coating seemed to restrict the light emerging from the bulb, which was outperformed even by a standard OEM bulb. As a result, the Hyper Arros came stone-dead last.

Click the links below to see more evo product tests...

> Car paint protection film – what is it and does it work?> Car shampoo: everything you need to know and the best car shampoos 2018> Aftermarket car suspension explained: can modern cars really benefit from an upgrade?> Best car waxes and polishes – the top detailing products for your car