Behind the scenes at the car dealer of your dreams

We get a tour around the showroom and workshops of Bell Classics, a place no car fan will ever want to leave 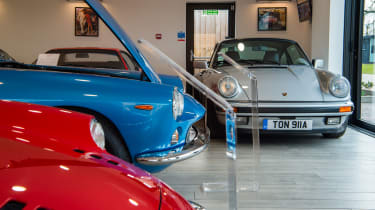 'Just outside Luton' might not sound like the most glamorous location for an exotic and classic car dealer, but behind an electric gate on a country road heading towards Markyate lies one of the most fascinating workshops and showrooms in the country.

Bell Classics has been around since 1989, but since then the company has changed dramatically from an Austin Healey specialist. Now it restores, services and sells all sorts of classic cars, but really specialises in Ferraris and older Aston Martins. 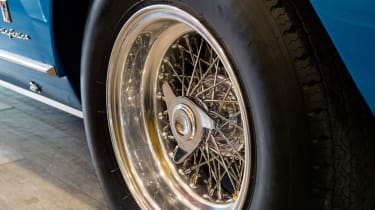 Now, the term restoration is a vague one. Sometimes it’s used to describe a quick tidy up, a blow over with a spray gun and a new set of brakes. Or, and in the case of Bell Classics, it can mean stripping everything before rebuilding the entire car so that it’s as good as new, or better. As many of the original parts will be reused as possible, but if anything does have to be replaced each element will be restored using the correct materials and everything will be finished in exquisite detail.

During our visit to Bell Classics, an immaculate, recently restored Ferrari 330 GTC sat in the middle of the showroom. The paintwork, a light metallic blue, stood out even in the presence of a bright yellow Ferrari Daytona race car and a typically red Ferrari 308 and Dino. The 330’s biscuity beige interior’s aroma was even better than it looked, the new leather of the recently retrimmed cabin smelt just how you’d imagine it would back in the ‘60s. But the car’s not perfect, not yet anyway. I am told the oil filter is the wrong colour, it will be changed for a proper black item soon. That’s the sort of attention to detail at work here.

> Find out more about the Ferrari 365 GTB/4 Daytona 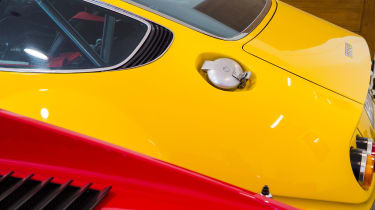 If it hadn’t been for the excitement of going to see where this car had been restored, the workshop where this sort of work was carried out, I’d have drooled over the GTC and the other cars in the showroom for hours. Before I move on, though, I am encouraged to go to the bathroom. Not because we have a long journey ahead of us, but because the bathroom itself is interesting. Under a glass panel on the floor of the lavatory sits a restored Dino V6 engine, so you can peer down the triple twin-choke Webers while you’re, well…

If you hadn’t guessed from the immaculate cars, the race cars and the perfectly preserved cars littering the premises, then the loo will make it obvious Bell Classics is run by guys with a real passion for cars. 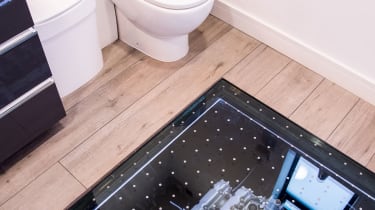 Behind the scenes, where the real magic happens, is even more tantalising now. The tidy brick buildings are just as clean and neat inside; oily, mechanical parts being stripped down to be rebuilt and restored are the only hints of anything dirty. But there’s plenty of new, clean and finished items being worked on or tucked away on shelves – a 250 Ferrari engine for example, just stored under a work bench – to counteract the filthy parts and keep the space overwhelmingly fresh. 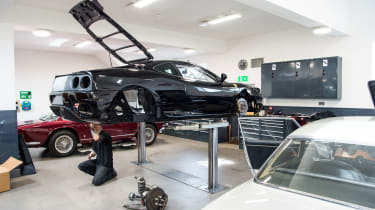 Still though, as enviable as the workshops are, it’s the cars sat quietly in every corner that draw my attention. Part-built DB5s and 308s, 360 Challenge race cars and Quattroportes raised up on ramps, and then rare and preserved 512s and Dinos peeking out from under covers. Everywhere you turn there’s something to ogle at.

Then, just as we leave the final garage to head back to the showroom, we stumble into my favourite car there, possibly my favourite car ever; parked in the sun, just where the outdoor drive-in cinema is being built, a blue Lancia Stratos Stradale with delicate hand-painted number 5s on its flanks and gold wheels. 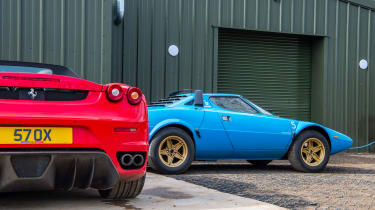 Bell Classics, with its beautiful cars, exceptional workshops and even its quirky toilets, is the most wonderful place to spend time and absorb the atmosphere. It turns out heaven is just outside Luton. Who knew?